Ibrahim Magu, the suspended acting chairman of the Economic and Financial Crimes Commission has made some allegations against Malami. 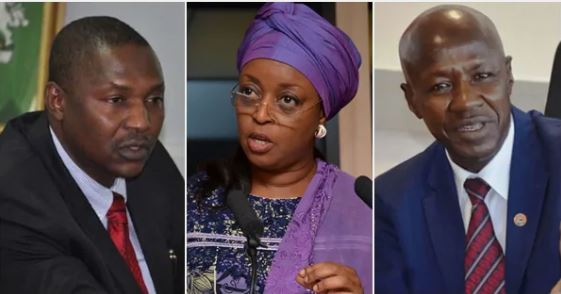 Abubakar Malami, Diezani Alison-Madueke and Ibrahim Magu
Suspended acting chairman of the Economic and Financial Commission (EFCC), Ibrahim Magu, has told a presidential panel that the Attorney-General of the Federation (AGF), Abubakar Malami, is the person frustrating the extradition of Diezani Alison-Madueke to Nigeria for trial.
Recall that Magu had been previously accused of refusing to cooperate with crime-fighting authorities in the United Kingdom to facilitate the return of a former petroleum minister, Diezani, to face prosecution in Nigeria for alleged corruption.
But the former acting chairman of the EFCC told a probe panel investigating allegations of corruption against him that it was his accuser, Malami, who was actually frustrating the extradition of Diezani to Nigeria, Premium Times reports.
Magu said the EFCC had made several requests to the UK authorities through the AGF's office demanding the extradition of the former petroleum minister so she can face charges in Nigeria.
He said Malami’s office never communicated Diezani’s extradition request to the UK authorities.
According to Magu, several requests through the AGF for the extradition of other high profile Nigerian fugitives abroad have not been responded to by Malami.
Meanwhile, Wahab Shittu, legal counsel of Ibrahim Magu, has expressed belief that his client will scale through the floodgate of allegations levelled against him.
Shittu made this known on Monday, July 20, adding that Magu and Nigerians should expect positive surprises from the Justice Ayo Salami-led presidential panel probe.
Speaking on the heels of a comment made by Garba Shehu, senior media aide to President Muhammadu Buhari, Shittu assured that Magu will come out clean from the investigation.
Top Stories