A photo of the meeting between Meek Mill and Kim Kardashian has surfaced following Kanye west's allegation. 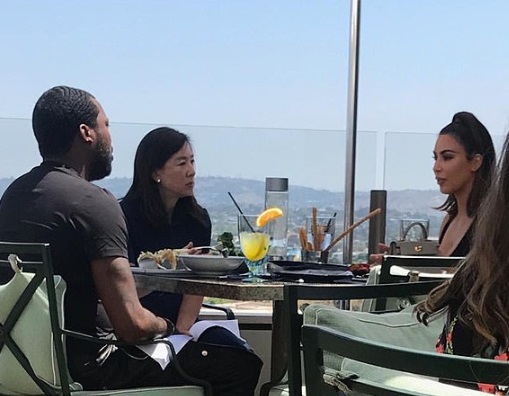 A photo showing Meek Mill and Kim Kardashian meeting inside a hotel
Following Kanye West's cheating allegation that his wife, Kim Kardashian met with Meek Mill at a Los Angeles hotel which prompted him to seek for divorce, a picture of the meeting has surfaced.
The picture was taken at a Los Angeles hotel where Kim met Meek Mill to discuss prison reform back in 2018.
Earlier this week, Kanye had shocked fans after he called out his wife and her mother Kris Jenner. He said that he had been "trying to get divorced" from Kim since she met up with Meek Mill at the Waldorf in Beverly Hills. He added that Kim was "out of line" for that.
Meek Mill had reacted to Kanye's allegation saying "Sh** is cappp cmon" before the latest picture evidence surfaced.
Cap is slang for lies.
In the photo, it clearly shows Kim, 39, and the 33-year-old rapper, real name Robert Rihmeek Williams, meeting in a professional capacity.
Kim and Meek were joined by philanthropist Clara Wu at a rooftop restaurant, where they are believed to have discussed prison reform.
After the photo emerged on Twitter, Meek Mill took to his Twitter account to tweet: "Being around the wrong environment and wrong people will make you forget your worth! Stay focused."
Top Stories