Nigerian Woman Trafficked To Oman Gets Locked Up, Prevented From Returning Home Despite Health Complications


In a footage sent to SaharaReporters, Funke said her stomach had swollen and her employer was unwilling to release her. 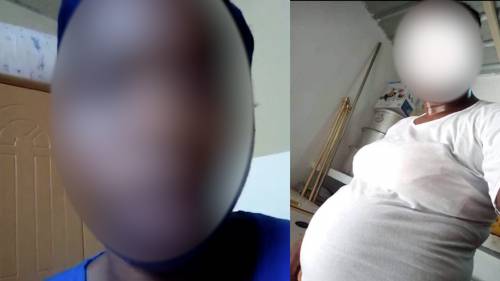 The woman has been locked up

A Nigerian woman working as domestic help in Oman has been locked up in a room by her employer for about five days now.

In a footage sent to SaharaReporters, Funke said her stomach had swollen and her employer was unwilling to release her.

Before her plight got to this level, Funke said she had reached out to the Omani police, who promised to help her return to Nigeria as soon as international flights were allowed to resume operations.

When SaharaReporters reached out to her, she said her boss had also agreed to release her when the airport was opened.

“I’ve been working for a year and three months but now I’m not feeling well, my stomach is aching me. Now it has swollen up,” Funke said in the video.

“My stomach swelled without me being pregnant. I have gone to the hospital, I’ve done tests and I’ve done a scan, they didn’t see anything there,” she added.

Funke revealed that her life took a turn for the worse after she returned from the police station.

The mother of two appealed to Nigerians to save her and help her see her children again.

“Please people of Nigeria have mercy on me, don’t allow me to die here in the name of God.

“My employer’s wife decided to stop feeding me until I have strength to resume work. My stomach has been swollen for three months now,” she said.

Although international flights remain suspended in several countries across the world, the Nigerian Government has been able to arrange evacuation flights for many citizens stranded outside the country and willing to return home as a result of the Coronavirus outbreak.

SaharaReporters learnt that the money sent for Funke’s trip back to Nigeria had been forcefully held by her employer, who has continued to detain her unlawfully.

Chairman of the House of Representatives Committee on Diaspora, Tolulope Sadipe, said that over 80,000 Nigerians were working as domestic help or sex slaves across several parts of the globe with majority of them in Mali, Oman and Lebanon.

She added that the agents, who lure these unsuspecting women to such places, use the absence of bilateral labour agreements between Nigeria and these countries to sell trafficked women to persons, who subject them to undue hardship and dehumanising treatment.