This is a look at how Kamaru Usman is gradually climbing up the financial ladder since making his debut in the Mixed Martial Arts franchise in 2015. 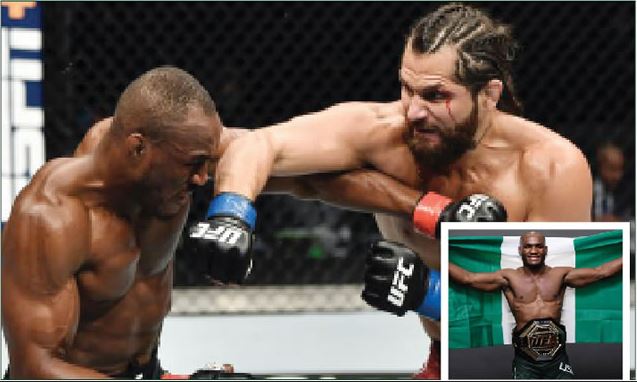 UFC welterweight champion, Kamaru Usman, is gradually climbing up the financial ladder since making his debut in the Mixed Martial Arts franchise in 2015. In this report, Kelvin Ekerete looks at the Nigerian’s career earning and win ratio

The “Nigerian Nightmare” has won the heart of fans and fellow fighters around the world with a perfect record in the UFC, going unbeaten in 12 fights, only lightweight champion, Khabib Nurmagomedov, ties his record as the only other fighter with a 100 per cent record in the franchise after 12 fights.

Usman’s win over Hayder Hassan was rated the fight of the night. The Nigerian Nightmare defeated his opponent in the second round via submission, using the arm-triangle choke till his opponent tapped out, conceding defeat. He earned $50,000 more for his performance.

Edwards and Usman’s bout was decided via unanimous decision after three rounds of action. The Nigerian beat his opponent on all of the three judges’ cards, 29-28, 30-27, 29-28 to win his second fight of the UFC franchise.

It was one-way traffic for Usman over three rounds with Alexander Yakovlev.

Usman turned Yakovlev into a grappling dummy, grinding him out in top position and punishing him with elbows to pick up a one-sided decision at United Center in Chicago.

The final scores were unanimously 30-25 for “The Ultimate Fighter 21” winner Usman.

Usman came at Alves the enthusiasm of a man looking to shatter his image as a lay-and-pray artist.

Usman (9-1 MMA, 4-0 UFC) chased Alves (10-2 MMA, 4-2 UFC) around the cage for three rounds, leaving him in a bloody mess after dozens of punches and a near-submission in the final frame.

The Edo-born fighter continued his winning momentum, grabbing a unanimous decision win over Sean Strickland in UFC 210 in New York. He once again dominated the fight and had a bigger share of points on the judges’ cards: 30-27, 30-26, 30-26.

Usman continued his rise to the top with a brutal knockout of Brazillian Moraes in just 2:48 minutes.

After winning his last four UFC fights by judge’s decision, most fans would be forgiven for expecting more of the same from Usman in this bout.

However, he showed up to UFC Fight Night with other plans and produced vicious first round knockout against Moraes, which was exactly what the Nigerian Nightmare needed in order to remind match makers why he deserved a top five (or at least top 10) opponent next.

Usman executed his plan to perfection, raining punches on his opponent after a takedown, with the referee forced to end the fight to save the injured Brazillian from further punishment.

The win is Usman’s quickest in the UFC.

Another visit to the Octagon, another win for Usman.

The Nigerian, improved to 12-1 overall and 7-0 in the UFC welterweight division with a methodical victory over Emil Weber Meek at UFC St. Louis.

The judges’ scores at Scottrade Center, St. Louis, Missouri, were 30-27 across the board for a unanimous decision against the Norwegian.

The UFC’s first venture into Chile ended with a unanimous-decision win for Usman over Demian Maia in the main event of UFC Fight Night 129.

As expected, the bout between the wrestler and the jiu-jitsu ace was heavy on grappling.

But Usman eventually triumphed, beating the Brazillian via unanimous decision to increase his chances of a title fight. The 33-year-old dominated the fight, scoring a 50-45, 49-46, 49-46.

Despite an undefeated record in the UFC, Usman has occasionally struggled to get the respect he feels he deserves.

With the winner between both fighters assured a title shot against then champion, Tyron Woodly, he dominated former lightweight champ Rafael dos Anjos (28-11) over five rounds at The Ultimate Fighter 28 Finale. The welterweight bout headlined the event.

Usman showcased a well-rounded arsenal against dos Anjos. He crowded the Brazilian with offensive pressure on the feet and took him down at least once in every round. Final scores showed a runaway victory: 50-43, 49-45 and 48-47.

This bout was the real deal, with Usman putting up an amazing display against champion, Tyron Woodly, to win the welterweight title in 2019 at the UFC 235 in Las Vegas. The Nigerian Nightmare, though the fight’s underdog, dominated the champion from bell to bell with a strong combination of wrestling, dirty boxing and relentless pressure. And with an unbeaten record of nine fights in the franchise, Usman proved once again his previous wins were no fluke as he won the duel 50-44, 50-44, 50-45.

This time, the devastating Usman took his time. Then, he ended Colby Covington.

Usman fought a back-and-forth battle with the Twitter troll for four-and-a-half rounds and it was impossible to wonder why the Nigerian wasn’t pressing the issue.

But then, with the clock ticking down in the fifth and final round, Usman obliterated Covington with a straight right hand. Covington fell and covered-up. Usman was on top of him immediately, peppering him with punches. Seconds later, the referee stepped in with exactly 50 seconds left.

The welterweight champion defeated his long-time foe in the Fight Island opener at Flash Forum in an incredibly convincing display to retain his crown. With it, Usman climbed to 12-0 in the UFC.

Masvidal was a late replacement for Gilbert Burns, but for many represented the greatest threat to Usman’s reign. However, the current belt-holder out-muscled his opponent throughout to win by unanimous decision 50-45, 50-45, 49-46 in Abu Dhabi.

Usman’s win over Masvidal was his first Pay Per View fight. The bout garnered over 1.3m PPV viewers around the world.