Busted!! Police Arrest Former Dispatch Riders After An Attempt To Snatch Vehicle From An Uber Driver


Two former dispatch riders have been arrested by the police for trying to snatch the car of an Uber driver. 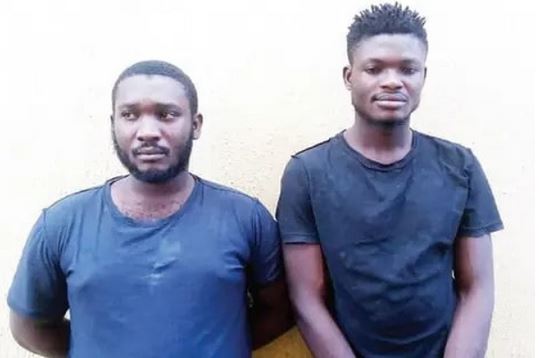 The Lagos state police command has apprehended two former dispatch riders identified as Sule Abdulkareem and Celestine Joseph after they attempted to dispossess an Uber driver of his vehicle in Anthony Village area of the state.

They were arrested by SARS operatives at Anthony-Oke area of the state, while looking for a more deserted part of the area to launch an attack on the driver.

The two suspects who both confessed to attempting to rob the driver, claimed they had wanted to use the vehicle as collateral for a loan to start up a business. A gun was also recovered from them.

“I met Celestine (Joseph) when we were both dispatch riders for an online retail company. I left the company when my salary was being deducted illegally even after I had paid fully for the motorcycle that was given to me.

“When I left the company, my friend told me that he wanted to start a restaurant and bar business on the Island and that he needed N1.6m for the business. We looked everywhere to get a loan, but nobody was willing to give us. It was during our search for the loan that somebody told us that we would need collateral.

Joseph on his own part said they got the gun from a friend and used it to protect themselves from hoodlums while they worked for the online company.

“We planned to snatch the vehicle from him before he got to Maryland; when we asked him to stop at Anthony bus stop, he refused.

“When he did not stop, we decided not to rob him again, but we were arrested by the police.”