A bus brought traffic to a halt on the third mainland bridge after it exploded while in motion. 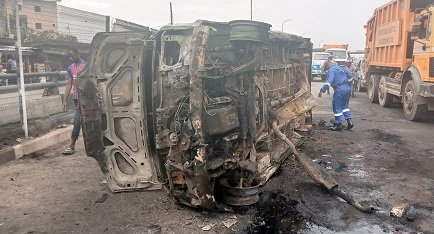 The car exploded on the third mainland bridge
There was chaos on third mainland bridge as a commercial bus conveying several kegs of diesel Tuesday afternoon exploded while in motion.
According to TheNation, the explosion occurred at 2pm around Adekunle, forcing the authorities to restrict vehicular movement to a lane while they battle to extinguish and recover the bus.
Lagos State Emergency Management Agency (LASEMA) no life was lost in the explosion, neither was any injury recorded.
Motorists trapped in the bedlam appealed to relevant agencies to resolve the issue speedily and spare them further hardship.
Some of them lamented that they were in traffic for over four hours on Monday, adding that traffic caused by the exploded bus might cause them more hours if not handled quickly.
Others expressed concerns over attacks by traffic robbers known for always taking advantage of such situations to fleece victims.
But the Lagos State Police Command dismissed fears of possible robbery attacks, insisting that it has deployed 1,000 cops to man strategic routes round the clock. 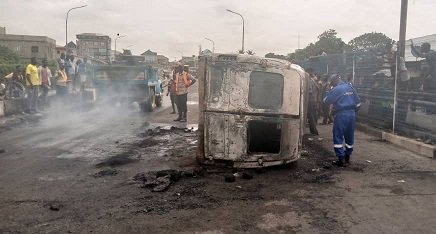 Police spokesman, Bala Elkana, said the 1,000 cops were being completed by officials of the Federal Road Safety Commission (FRSC), Nigerian Security and Civil Defence Corps (NSCDC), Lagos State Traffic Management Authority (LASTMA) and other relevant agencies to ensure that residents are kept safe even in traffic.
“Our men are everywhere. We have made deployment since the night before the bridge closure. So, people should not panic. We know that there will be traffic but we are also on our toes to ensure there are no obstructions and criminals do not take advantage of the situation,” he said. 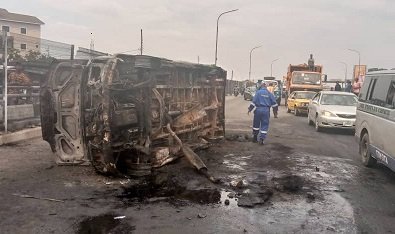 "Stop Trying To Get Me To Support Anyone, I Don't Know Them" - Ex BBNaija Winner, Mercy Eke