Residents identified the deceased victims as a businesswoman and owner of the gas shop, Titilayo Adeyanju, her daughter, Funke, and a customer identified simply as Alfa. 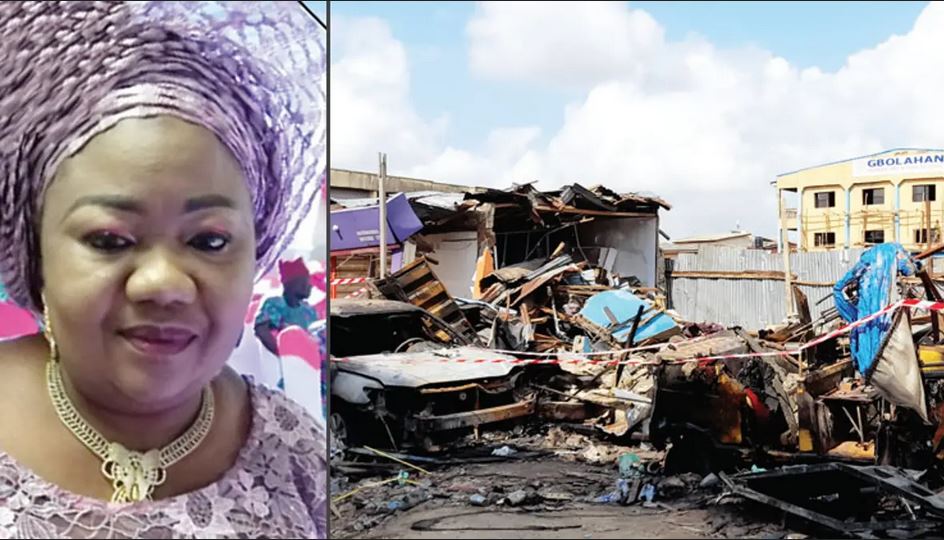 Titilayo and the scene of the explosion

According to a report by The PUNCH, a man, simply identified as Victor, has died from the injuries he sustained in the gas explosion, which occurred on Innua Muhammed Street, off Asa-Afariogun Street, in the Ajao Estate area of Lagos State, on Tuesday.

Victor, a tailor, was said to be working in his shop when the explosion occurred in one of the adjoining shops where gas was being refilled into cylinders.

Victor was reportedly rushed to the Faith City Hospital for treatment but was pronounced dead on arrival.

PUNCH Metro had reported that three persons died on Tuesday during the explosion and that no fewer than nine shops were destroyed by the impact of the explosion.

When one of our correspondents visited the scene of the incident on Wednesday, residents identified the deceased victims as a businesswoman and owner of the gas shop, Titilayo Adeyanju, her daughter, Funke, and a customer identified simply as Alfa.

It was learnt that Titilayo had closed for the day when the welder, Alfa, came in a commercial tricycle to purchase gas at her shop.

Residents of the area, who spoke to PUNCH Metro, said Titilayo initially refused to attend to Alfa, but after much persuasion, she changed her mind and instructed her daughter, Funke, who usually assisted her, to attend to the customer.

However, as Funke attempted to transfer gas from one of the giant cylinders into the miniature cylinder brought by the welder, the whole shop exploded.

The impact of the explosion was said to have blown Titilayo, Funke and Alfa into pieces.

A vulcanizer in the area, who gave his name simply as Rabiu, said Funke was trying to fix a hose on a giant cylinder when the explosion occurred, adding that he escaped being killed by a whisker.

Rabiu stated, “I was joking with Titilayo and walking away when her daughter opened the shop to attend to the customer. I usually shy away from helping her to roll out the cylinders, because they are too heavy. Funke was trying to fix a hose on a giant cylinder when it exploded.

“I initially thought it was a three-storey building, which was under construction on the street, that collapsed, but when I looked back, I saw many shops and vehicles on fire; I quickly rushed back and saw that mummy (Titilayo) had been killed by the explosion. She was blown into pieces.

“The tailor, Victor, was seriously wounded in his shop, where he was pressing a dress. His waist was severed by one of the giant cylinders. He was still alive and pleading for help when people rushed him to the Faith City Hospital, which is some metres away from the scene of the incident. Unfortunately, he died as soon as he got to the hospital.”

Another eyewitness, who identified himself simply as Taye, said the victims died a painful death, adding that it was not long after he left Titilayo’s shop that the explosion occurred.

He said, “I have not been to the area since the lockdown started. I resumed for business on Monday and on Tuesday, I was in her shop hours before the explosion took place.

“I just can’t believe that mummy Titilayo is gone just like that. She and her daughter died in a very painful way. God saved her grandson, who usually comes with her to the shop. That very day, I was told he decided to stay back. The death of the woman and her daughter is a big loss to their family.”

A barber in the area, who gave his name simply as Femi, said, “The cylinders were flying out of the shop like rockets. One landed on the roof of a three-storey building under construction and started burning the roof. Others hit about three vehicles parked on the street, including that of Titilayo, and set them ablaze.

“It was when the explosion subsided and we rushed to see if we could save those trapped that we discovered that Titilayo had been killed. Her remains were deposited in a morgue.”

When contacted, one of the shop owners, Taiwo Agbalaya, said, “I lost 15 televisions and 10 home theatres, and other valuables. I could not even see my shop after the explosion. I was not in the shop when the incident happened but I had a visitor who was injured. I don’t know what to do, I want the government to help me.”

To prevent a secondary incident, it was observed that the scene of the incident as well as some shops along the stretch had been cordoned off by officials of the Lagos State Building Control Agency. The three-storey building, which was partially affected, was also cordoned off.