Oh No!! Photo Of Two Brothers Arrested For Raping Their 13-Year-Old Cousin In Imo


The suspects who lured her in under the pretext of accomodating her had carnal knowledge of her in turns. 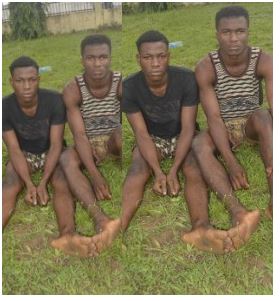 Men of the Imo state police command have arrested two brothers identified as Uchechukwu Asuzu, 20, and Bright Ugochukwu, 20, have been arrested by for allegedly defiling their cousin, Ugochukwu Chigozirim Ehirim, 13, in Ezemanah Ezeamoruo Nkwerre, a community in the state on July 11.

Spokesperson of the state police command, SP Orlando Ikeokwu, who disclosed this to newsmen, said the victim was raped by her cousins after her grandfather angrily sent her out of their home.

Uchechukwu Asuzu and Bright Asuzu who are cousins to the victim, lured her to their house under the pretext of accommodating her for the night but rather had canal knowledge of her in turns.'' Ikeokwu said in his statement

The spokesperson said the brothers would be charged to court soon.