In a clip that has gone viral on social media, the nanny appears to be slapping the crying baby. 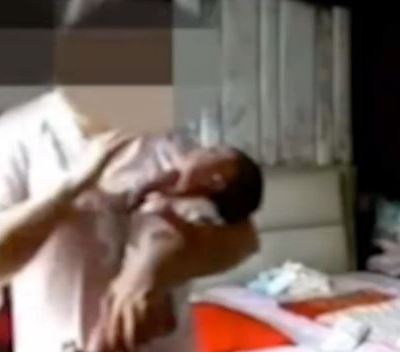 A horrifying video captured the moment a nanny beat a baby when he woke up crying.

The baby's 26-year-old dad, Mr Tian, said he saw the childminder slap his child's buttocks, feet and hands after watching security footage on his phone, according to police.

In a clip that has since gone viral on social media in China, the nanny, 50-year-old Wang Mou, appears to slap the crying baby's thighs as he lies on the bed.

More videos, recorded between July 31 and August 1, show the nanny apparently slap the baby as he lies screaming in her arms. She is accused of hitting the child "like a toy".

The footage was recorded in the parents' home in the city of Shahe in northern China's Hebei province.

Mr Tian's wife uploaded the footage on the messaging platform WeChat where it was picked up and shared by influential Chinese bloggers and went viral on Weibo.

A police statement says that Mr Tian saw the footage for the first time on Saturday, August 1, at around 6pm and confronted the nanny the same day.

He then went to the nanny's agency with his older brother and complained about the alleged mistreatment of his son.

The brothers were then said to have a "dispute" with Ms Wang outside the company and one of the brothers is alleged to have hit her car with a tool.

Ms Wang then became frightened and went to a hospital for treatment, police said.

Officers said they were carrying out further investigations. They noted that they were treating the incident as an administrative case.

Parents accuse nanny of slapping their newborn son "like a toy" in a footage secretly filmed in Hebei, China. . The parents said they were horrified when they watched the video on Saturday, August 1. . They have reported to the authorities and officers said they are carrying out further investigations.