In an exclusive video, had reported that Omo-Dada rejected his wife and two daughters because of the colour of their eyes. 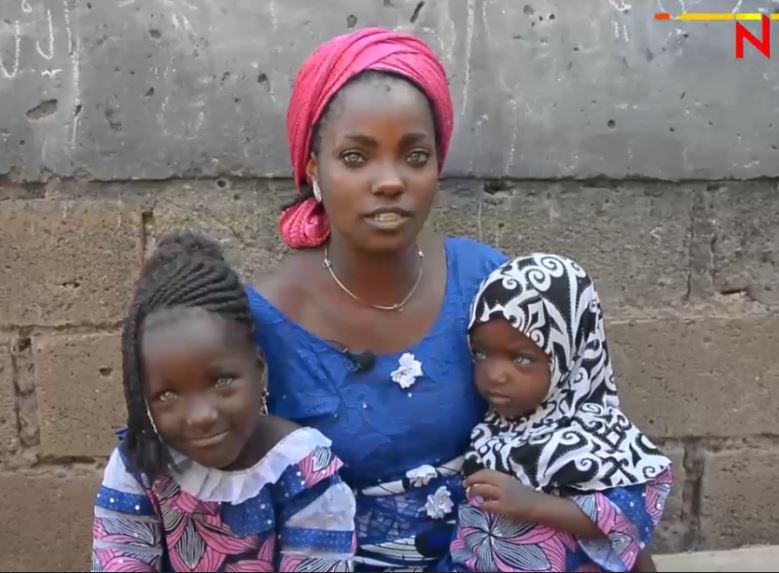 Risikat Azeez with her two daughters

Olufolake Abdulrazaq, the wife of Kwara State Governor, has offered to assist a poor blue-eyed mom, Risikat Azeez, who was dumped by her husband, Abdul-Wasiu Omo-Dada, The PUNCH reports.

The PUNCH, in an exclusive video, had reported that Omo-Dada rejected his wife and two daughters because of the colour of their eyes.

Azeez, who said she sees clearly with her eyes despite the colour, lamented that her husband, who married her that way, changed when she gave birth to two kids with the same set of eyeballs.

She narrated her experience of living with blue eyes which is alien to the dark hue that most people have in this part of our world to The PUNCH in Ilorin, the Kwara State capital.

The mother of two, who spoke in Yoruba Language, said, “I was born with these eyes and I also gave birth to my children with same pair of eyes. Since I was born, I have never had any challenge with my eyes. I have never been to the hospital due to any discomfort. I thank God.

“No one had this set of eyes before me in my family; both from my mother and father’s side. I’m the first to have this kind of eyes. And when I started bearing children, they also have it and I did not regret that I have this set of eyes with my children.”

Also, her sister, Balikis Azeez, whose eyes’ colour is black, said, “When my sister was born, people thought she had eye problems but upon medical examination, the opticians said there was no problem with her eyes; they said she has foreign eyes.”

The blue-eyed mom added, “As a young girl, I was later taken to the hospital for medical examination and came back home with lots of gifts because the doctors liked my eyes. They also said there was nothing wrong with it.”

She further stated, “My husband whose name is Abdul Wasiu Omo-Dada is very aware of the condition of my eyes and he loved me for who I am. Things started getting bad when I had my first child and later my second child. He totally changed and he would shut me up and walk out on me whenever I tried to start a conversation with him.

“His parents even told him, ‘Will you keep on giving birth to children with this kind of eyes?’ He changed to the extent that he would leave the house for a whole week before coming back home. There was no food and no provision that I had to go to my parents’ place to feed.

“My parents later asked me to leave his house. Since I left till now, he has not shown up to ask why I left or ask after me.

“It is my desire for my kids to be educated because my parents sent me to school within the limit of their capacity which is not even adequate for me because I can’t speak. But it is my desire for my children to be well-educated if I have the funds and if God enables me.

“My first daughter who is almost five years old has never attended a school before but I will like them to be educated.”

Some Nigerians including the Kwara governor’s wife have expressed willingness to help Azeez and her kids.

Abdulrazaq commented via Twitter that she has been in touch with the mother of two through her foundation, the Ajike People Support Centre.

When contacted, the Chief Press Secretary to the governor’s wife, Adeniyi Adeyinka, confirmed the development.

Adeyinka said, “Azeez has been gotten across to by the Director of Protocol to her Excellency, Hassan Raphael. She has been invited and when eventually she appears here, talks generally will bother on what she will like to do going forward, empowering her and afterwards mediate on how she will possibly be reunited with her husband – that is possibly.

“But in the interim, she has been invited and she will be asked what she will like to do to fend for her children and herself. Her Excellency will also talk to her about how to enroll the children in school after school lockdown is over. Resettling her is part of the plan too.”

Also, the DOP to the governor’s wife, Raphael, said, “Her Excellency picked interest in the woman and the girls. She said she will like to see them. May be on Monday. She has also contacted the Commissioner for Education to enroll the children in school. There are some other things she plans to do for the woman but I cannot say precisely.”