Nigeria's Lagos-Ibadan speed train has been described as the home of luxury because of the modern technology used in making it comfortable for passengers. 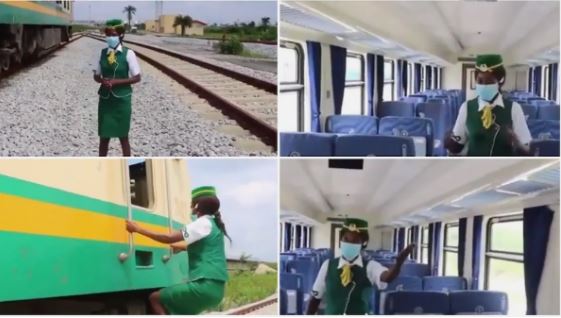 The train is fitted with movie screens and air conditioners
The luxurious inside of the Lagos-Ibadan speed train with movie screens, air conditioners and comfortable sitting areas have been unveiled.
Recall that the rail project is about to be completed; a female train driver, Bai Yang, in a short video has taken people through the coach and what to expect.
Before going into the train, Yang said that the journey between Lagos Ibadan has been greatly reduced. She added that as a driver, it is very important that she checks the brakes and other important parts of the train before any journey.
On the train, she showed viewers how very spacious the inside is with comfortable passenger's seats. She added that there is AC for those boarding and screens to watch movies.
Watch the video below:

"What a man can do, a woman can do better" - Bai Yang,🇳🇬1st Female Train Driver 👏