The document inaugurating the panel which was personally signed by the President stated that the commission had 45 days to complete its probe of the suspended EFCC boss. 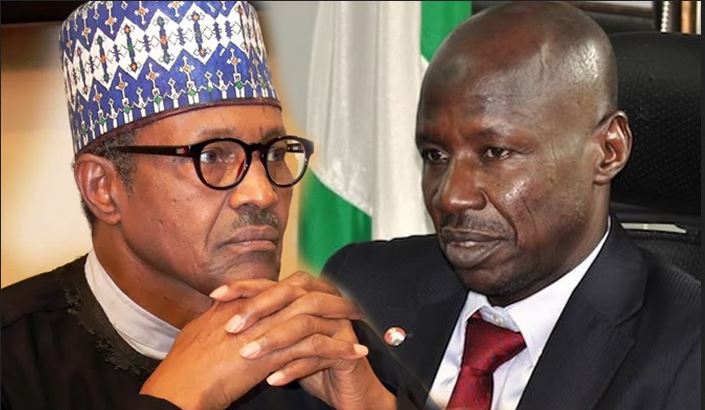 According to The PUNCH, the Judicial Commission of Inquiry set up to investigate the suspended acting Chairman of the Economic and Financial Crimes Commission, Ibrahim Magu, is expected to submit its report latest next week going by the terms of reference given to the panel by the President, Muhammadu Buhari.

The document inaugurating the panel which was personally signed by the President stated that the commission had 45 days to complete its probe of the suspended EFCC boss.

The document is titled, ‘Instrument Constituting a Judicial Commission of Inquiry for the Investigation of Mr. Ibrahim Magu, the Ag. Chairman of the EFCC for Alleged Abuse of Office and Mismanagement of Federal Government Recovered Assets and Finances from May 2015 to May 2020’.

Buhari listed the seven members of the panel to include a former President of the Court of Appeal, Justice Ayo Salami (North-Central); Deputy Inspector-General of Police, Michael Ogbezi (South-South); a representative of the Federal Ministry of Justice, Muhammad Babadoko (North-Central); and Hassan Abdullahi from the Department of State Services (North-Central).

Others are Muhammad Shamsudeen from the Office of the Accountant General of the Federation (North-West), Douglas Egweme from the Nigerian Financial Intelligence Unit (South-East), and Kazeem Atitebi (South-West) who serves as the Secretary.

The document dated July 3, 2020, read in part, “I hereby direct the judicial commission to submit its interim reports to me from time to time but the judicial commission shall, in any case, submit its final report not later than 45 days from the date of its first public sitting or within such extended period as may be authorised by me in writing.”

The PUNCH learnt that the commission is expected to submit its report on or before August 19, 2020.

It was also learnt that although the President recommended a public sitting, the commission led by Salami had been holding its activities behind closed doors.

According to the document, Buhari directed the panel to audit the accounts of the EFCC from 2015 to 2020.

The panel is also to investigate allegations of personal enrichment, abuse of office, disobedience to court orders, and the alleged sale of recovered assets to cronies by Magu.

The commission was asked to investigate an alleged complaint against Magu by the National Crime Agency of the United Kingdom.

The suspended EFCC boss is also being probed for his handling of the controversial P&ID case which cost Nigeria billions of dollars in judgment debt.