A mother has the last laugh after standing by her son who saw it rough trying to acquire secondary and university education. 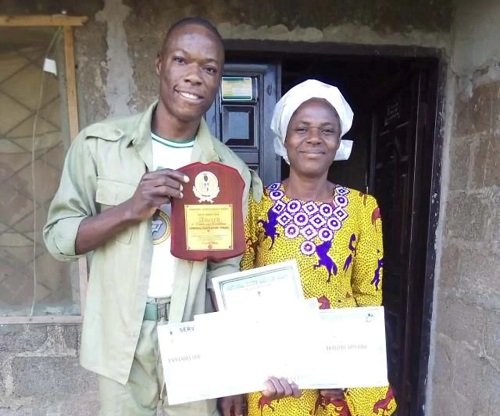 Oluwasayomi and his mother
Esther Ahmadu is a proud mother of a graduate. The widow stood by her son and sponsored him all through university even when he was made to write O'level exams 17 times in 5 years.
The retired teacher never gave up on her son, Emmanuel Oluwasayomi Ahmadu, when the latter failed O'level examinations many times in five years, Vanguard reports.
Emmanuel wrote O'level 17 times in five years and his mother was the one who sponsored the examinations.
Speaking of his mother, the young man said: “My mom has been the one God used in sponsoring majority of my enrollments throughout the 16 primary schools, 14 secondary schools and the entire 17 O’level examination attempts, including the University Matriculation Examinations (UME) I wrote 5 times."
According to Emmanuel, his mother spent virtually all her salaries for his education and also borrowed money from people.
Emmanuel, who just finished serving his fatherland through the National Youth Service Corps (NYSC), said his mother also engaged in all types of petty businesses and also obtained bank loan just to sponsor his enrollments and education and that of his siblings.
He added: "She trained us in God’s way from childhood and she never gave up on any of her children despite opposing tides and societal challenges."
Emmanuel said his mother would always encourage them never to be tired and that all would be well.
Top Stories