The suspects were picked up at different locations in the Federal Capital Territory and Nasarawa State. 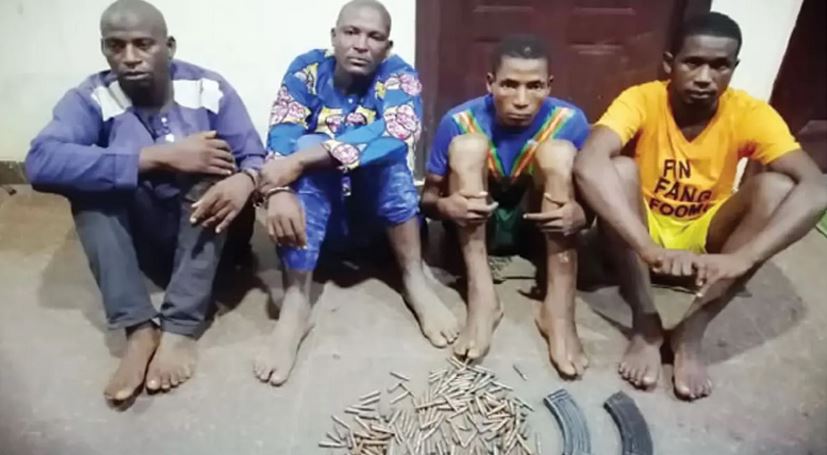 The PUNCH reports that a syndicate involved in illegal sales of ammunition to bandits across the country has been busted by the police with four suspects arrested.

The suspects, Abdullahi Mohammed, Haruna Bello, Husein Abdullahi Aka Gide and Yusuf Barkeje, were picked up at different locations in the Federal Capital Territory and Nasarawa State.

City Round learnt that operatives of the Inspector-General of Police Intelligence Response Team went after the syndicate following a spate of robbery and kidnapping perpetrated by bandits in some parts of the country.

The four suspects were arrested recently by the detectives who traced their buyers to Lokoja and Lafia in Kogi and Nasarawa states respectively.

“In the course of investigation, it was discovered that Abudullahi, who transports the ammunition to the buyers, resides in Kubwa area of Abuja. He was arrested in his hideout and he owned up to his role.

“He said he had been contacted to pick another 320 rounds from some members of his syndicate in Nasarawa for onward delivery to a contact identified as Haruna Bello.

“Mohammed led operatives to Lafia where three other members of the gang, Abdullahi, Bello and Barkeje were apprehended and 320 rounds of ammunition recovered.

“They usually opened the door mart of the car and neatly concealed the ammunition in it.  This will enable them beat security operatives on the road,” a source disclosed.

Narrating his role in the gang, 20-year-old Mohammed, who was paraded during the week, said he was engaged by one Smallie at large and he used his (Mohammed’s) Gulf car to deliver ammunition to the bandits.

The native of Kachi-Wuse area of Niger explained that he had successfully carried out two operations since February 2020 when he joined the gang.

He stated, “I am a Fulani man and into cattle rearing. I have seven cows in Adamawa State, and they are with my younger brother. It was a boy known as Smallie, who introduced me to the illegal sales of ammunition in February.

“I am the gang’s delivery man. I have a Golf car which I used for public transportation and I shuttle Kaduna, Taffa and Zaria routes. In one of my trips, Smallie and I had a conversation and he said he wanted me to work for him. He said he wanted me to be transporting ammunition for him to his contacts across the country and he offered to pay me.

“On my first operation, he paid me N60,000. I supplied 150 pieces of live ammunition to one Yellie in Lokoja. I picked up the ammunition from Zuba area of Abuja.”

To beat security agents on the road, Mohammed stated that he wrapped the ammunition with nylon and concealed it in his car door mart.

He said in April 2020, Smallie asked him to pick another set of ammunition in Kaduna State and deliver it to Yelie in Lokoja, stating that he was paid N100,000 for the assignment.

“It was on the third operation that I was arrested. It was Haruna Bello who Smallie linked to me that gave me up for arrest,” he added.

Bello, 27, a herdsman and farmer who hails from Lafia, said he was introduced to the illegal ammunition business by one Nuru whom he met while his cows were grazing in a bush.

The father of four said Nuru begged him to help source for ammunition he would use for a tribal fight in Benue State.

He said, “Nuru complained to me that Agatu people are killing Fulanis in Benue State and asked if I can assist him get ammunition to fight Agatu people. I told him I know Husein Abudullahi, Aka Gide, who is the chief supplier of ammunition in Lafia.

“I called Gide and asked him to get me 320 rounds of ammunition. Gide promised to get the ammunition for me and we arranged to meet in Lafia. That was when the police came and arrested me.”

In his account, Abdullahi, 29, from Nasarawa State, said he got supplies of ammunition from one Sunday based in Benue State.

He admitted that Bello contacted him for 320 rounds of ammunition which he bought from Sunday at the rate of N700 per one, running into N224,000.

He said, “I am a cattle rearer. I have two wives and eight children. It was while I was rearing cattle that I met one Sunday in Benue State. He sells arms to herdsmen and he started supplying ammunition to me.

“When Haruna (Bello) reached out to me for ammunition, I approached Sunday and he sold 320 rounds of ammunition to me. I paid him N224,000. It was Haruna that sent me the money. I was about to hand over the ammunition to Haruna when I was arrested. This was my first supply.”