The petition, which was started by Usani Odum, has garnered nearly 500 signatures barely hours after it was initiated. 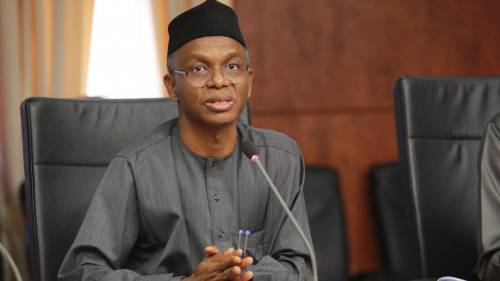 No less than 500 people have signed a new petition asking the Nigerian Bar Association to remove Kaduna State Governor, Nasir El-Rufai, from the list of speakers in the upcoming Annual General Conference of the NBA, The PUNCH reports.

This is just as some lawyers called on the NBA leadership to remove el-Rufai from the list of speakers due to his leadership failure in the wake up of the killings in Southern Kaduna as well as his human rights record.

The petition, which was started by Usani Odum, has garnered nearly 500 signatures barely hours after it was initiated.

The summary of the petition read, “The senseless killings in southern Kaduna must stop. The political correctness of Governor El-Rufai on national TV is diversionary. It is a reversal to have him speak to lawyers on security, when Governor (Babagana) Zulum of Borno a better person can do so.

“We may not be able to do anything to stop the killings, but we can stop the governor from speaking at the NBA-AGC to show our disapproval of the manner he has handled the situation!!”

Meanwhile, several lawyers have publicly indicated that they will not be attending the NBA conference if the leadership of the bar insists on el-Rufai.

In a letter, titled, ‘Request to Withdraw the Offer of Platform at the 2020 Annual General Conference of the NBA to Mallam Nasir el-Rufai’, and addressed to the Chairman, Technical Committee on Conference Planning,  NBA, Prof Koyinsola Ajayi, some lawyers said the governor must not be allowed to speak at the conference.

The letter, which was signed by Silas Onu and Auta Nyada, listed 10 allegations against el-Rufai and his son, Bello, who is a Special Adviser to Kaduna Central lawmaker, Senator Uba Sani.

The lawyers recalled that el-Rufai had during the run-up to the 2019 general elections threatened that any foreigner who interfered in the election would leave Nigeria in “body bags”.

They stated that several human rights groups had ranked el-Rufai low for his intolerance for the opposition.