So Sad! 3 Teenagers Take Turns To Sleep With 13-year-old Girl, Drown Her Inside Pond In Katsina (Photo)


Three teenagers who sexually assaulted a 13-year-old girl before drowning her inside a pond have been apprehended. 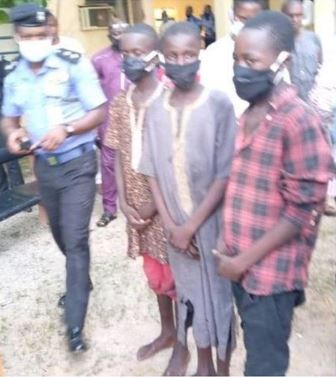 The three teenagers who gang-raped a 13-year-old girl before killing her
The Katsina State Police Command has arrested three teenage boys for allegedly gang-raping and drowning a 13-year-old girl to death in a pond, according to NAN.
The State Police Spokesman, SP Gambo Isah, confirmed their arrest during a press briefing on Wednesday in Katsina.
The suspects aged between 15 and 16 are resident of Danmusa Local Government Area
According to Isah, the trio, all from Danmusa town, allegedly conspired, attacked and gang-raped a 13-year-old girl from Dutsen-Dadi village in Danmusa Local Government Area in their farmland on Aug. 14, 2020.
He said that after raping the victim, they threw her into a nearby pond, as a result of which, she got drown and died.
The spokesman added that the victim’s dead body was later discovered and taken to Danmusa Hospital, where she was confirmed dead.
Isah revealed that during investigation, the suspects confessed to have committed the offence.
Top Stories