The true story has been revealed following viral reports that alleged kidnap kingpin, Chukwudumeme Onwuamadike has been sentenced to death. 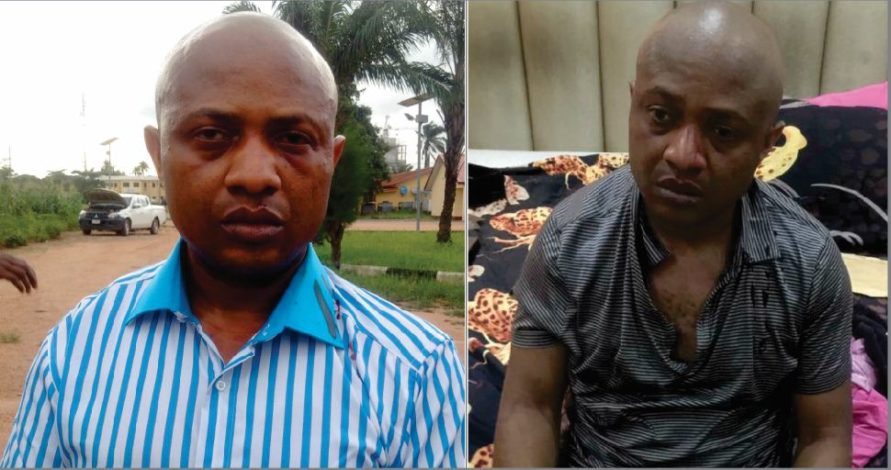 Alleged kidnap kingpin, Chukwudumeme Onwuamadike
Claim: An online news medium “tmnewsonline” (TM news magazine) and several other platforms, including observer times, kanyidaily, nigerianjournal, thecitypulsenews on August 18, 2020 published a report that kidnap kingpin Chukwudumeme Onwuamadike (a.k.a. Evans) had been sentenced to death by Lagos High Court.
Verdict: The claim that Lagos High Court sentenced the alleged kidnap kingpin, Chukwudumeme Onwuamadike, also known as Evans, to death is false.
Full Text
An online news medium, tmnewsonline, on August 18, 2020 published a story in which it alleged that kidnap kingpin Chukwudumeme Onwuamadike (a.k.a. Evans) was reported to have been sentenced to death by Lagos High Court.
“Lagos High Court has sentenced notorious kidnap kingpin, Chikwudubem Onwuamadike, also known as Evans, to death. The court gave this judgement on Monday. The Lagos State Government had said Evans conspired on February 14th, 2017 at about 7.45pm at Ilupeju, Lagos, to kidnap one Donatus Dunu and collect €223,000 for his release,” the story read on the website.
Several other platforms; observer times, kanyidaily, nigerianjournal, thecitypulsenews and others also reproduced and published the story with the same headline and content.
But how true is the claim?
Evans, tagged as the “most notorious kidnapper in Nigeria” by the police, was arrested in 2017.
He was apprehended by the Inspector General of police’s Intelligence Response Team led by Abba Kyari.
In 2013, Evans was declared wanted after he allegedly masterminded the attempted kidnap of Mr Vincent Obianudo, a businessman who owns the popular ‘Young Shall Grow Motors’.
The suspect was said to have carried out kidnapping operations for more than five years before he met his waterloo.
The Nation reports that Evans has changed lawyers about five times during the course of his trial which commenced August 30, 2017.
Verification
As of the time of filing this report about the proceedings on Evans’ case, The Nation reports that Justice Taiwo of Ikeja Special Offences Court listened to Inspector Idowu Haruna, a member of the Intelligence Response Team of the Inspector General of Police (IGP) on Tuesday, August 18, 2020, who said he obtained the confessional statements of alleged kidnap kingpin, Chukwudumeme Onwuamadike, under a conducive atmosphere.
Evans was arraigned before Justice Taiwo with three other defendants — Joseph Emeka, Chiemeka Arinze and Udeme Upong — over alleged attempt to kidnap the Chairman of the Young Shall Grow Motors, Mr. Vincent Obianodo.
They are facing a seven-count charge including murder, attempt to commit murder, attempt to kidnap, sale and transfer of firearms.
They all pleaded not guilty.
Justice Taiwo, however, adjourned further hearing in the matter till August 25.
Justice Hakeem Oshodi of an Ikeja High Court on August 14, declared that four co-defendants of alleged kidnap kingpin, Chukwudumeme Onwuamadike, have cases to answer, dismissing their ‘no case submission’ application.
Ogechi Uchechukwu, Chilaka Ifeanyi, Okwuchukwu Nwachukwu, and Victor Aduba had filed no-case submissions, praying the court to dismiss the charges against them by the Lagos State government.
Evans is also standing trial before Justice Oshodi alongside Uche Amadi, Ogechi Uchechukwu, Chilaka Ifeanyi, Okwuchukwu Nwachukwu, and Victor Aduba over the alleged kidnap of the Chief Executive Officer of Maydon Pharmaceutical Limited, Mr Donatius Dunu.
Justice Oshodi also adjourned till October 16.
In July, Justice Hakeem Oshodi of an Ikeja High Court ordered the Lagos State Office of the Public Defender (OPD) to take over the defence of the alleged kidnap kingpin because of Evans’ inability to pay his legal fees.
Director, Public Affairs of the Lagos State Ministry of Justice (MOJ), Mr Kayode Oyekanmi, dismissed the news as fake.
He said: “This is fake news, someone also called me, this is fake news to the extent that I know. Nothing like such.”
The Nation contacted tmnewsonline (TM news magazine) to ascertain the source of the story, a male Temidayo Babalola, who said he is the Editor, could not provide the source to the story when asked.
Conclusion
Alleged kidnap kingpin, Chukwudumeme Onwuamadike (a.k.a. Evans), facing several count-charges since August 30, 2017 was not sentenced to death by a court. The story by tmnewsonline and several other platforms is false and misleading.
Source: The researcher produced this fact-check per the Dubawa 2020 Fellowship partnership with The Nation Newspapers to facilitate the ethos of “truth” in journalism and enhance media literacy in the country.
Top Stories