Insecurity: This Nigerian Governor Wants Citizens To Carry Arms To Protect Themselves


The governor said this on Friday at the one-year anniversary of the re-establishment of the Ministry of Police Affairs. 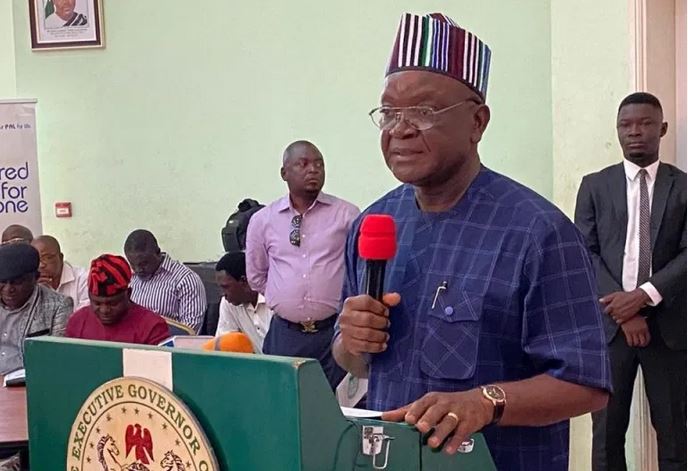 Governor Samuel Ortom of Benue State has called on the Federal Government to allow citizens to bear arms to protect themselves against rising insecurity in the country.

Mr Ortom said this on Friday at the one-year anniversary of the re-establishment of the Ministry of Police Affairs.

The Nation Newspaper reported that the Police Inspector General, Muhammad Adamu, also spoke about how the N13.5 billion approved by President Muhammadu Buhari for community policing will be spent.

In his reaction to the development, Mr Ortom said Nigerians must “wake up in order not to be consumed by insecurity”.

“I heard people complaining that Ortom called for Nigerians to be allowed to carry sophisticated weapons and that it would bring about anarchy. What about the herdsmen who are carrying AK-47 and kidnapping innocent Nigerians, raping our women and destroying our villages and towns and becoming a terror to us? How about them? Why can’t we collect these sophisticated weapons from them? How many of them have been arrested?” he queried.

He said while his advice has been left unattended to, some arrested kidnappers have been caught with “AK-47″.

Mr Ortom said security operatives in his state had already arrested 400 herdsmen who violated the state’s law against open grazing of animals.

“We have arrested about 400 herdsmen and some are not even Fulani. But majority of them are Fulani and we have prosecuted them,” he said.

“Today, we have convicted more than 130 herdsmen who are already serving various jail terms and some have paid fines.

“We have arrested over 9000 cattle, but as the law stipulates, once you pay fine, we release them to you and you transport them. You no longer go on foot with those cattle within Benue State.

“On the issue of foreign herdsmen coming into the country, I am happy that the Inspector General of Police some few days ago did say that these herdsmen are not Nigerians. That is what I said about two to three years ago.

“I knew it. I am not a security expert. But as governor, I receive briefings and I was able to do my independent investigation and knew that these people are coming for an agenda.

“Nigerians must wake up. If we don’t wake up we will all be consumed.”

Speaking further, he mentioned that the N13.5 billion approved by the president will support the logistics of the community police officers.

“The governor has long be advocating that the Federal Government should allow responsible citizens to carry arms. That is sophisticated weapons. They should license responsible Nigerians so that they can defend themselves,” he said.