Oshiomhole Works For Me, He is Not My Godfather - Osagie Ize-Iyamu


In an interview, the governorship candidate clearly stated that Oshiomhole is not his godfather but someone that works for him. 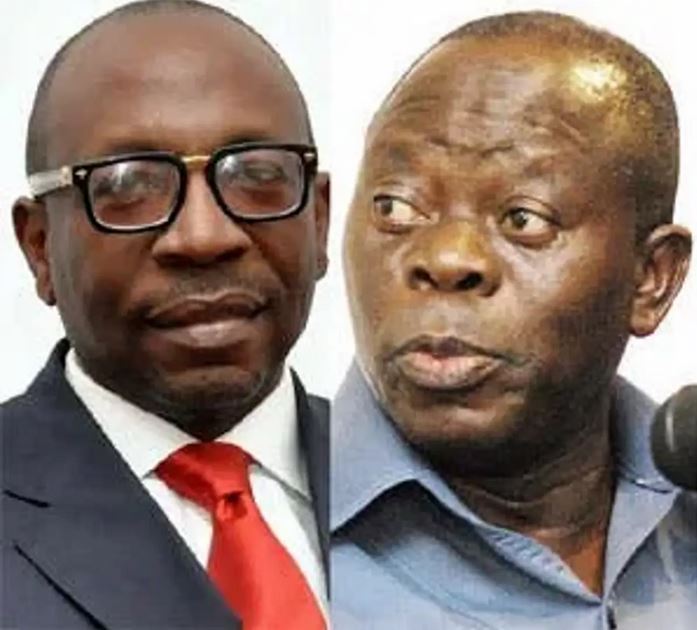 Osagie Ize-Iyamu, the APC governorship aspirant in Edo state has cleared the air on his relationship with the former Governor and national chairman of the All Progressives Congress (APC) Adams Oshiomhole, ahead of the forthcoming election in Edo state.

In an interview on Arise Television on Sunday August 23, Ize-Iyamu stated that Oshiomhole is not his godfather but someone that works for him.

The governorship candidate who noted that he is not new in politics, also recalled how he stepped down for Oshiomhole during the governorship election in Edo state in 2007.

“In 2007, my people were urging me to become governor but I stepped down for him because his area has never had a governor, he comes from Edo north.

“Where I come from, Edo southwest has had a governor. I just thought that well, for equity to prevail, it will be nice to make history. Of course, he has done so well as chairman of APC and I just said well, you know it’s good.

“So for somebody like me to now describe him as a godfather or say Oshiomhole is my god father… on what basis?. We have had history of robust engagement, we have disagreed and come back together, so what you see is mutual respect.

“Yes, you can say he brought Obaseki but Obaseki was new, you can’t compare him to me. I was national vice chairman of ACN; I was one of those who crafted the constitution of the APC. He did not live here even though he was born here, he came from Lagos, so he needed a godfather, he needed someone to nurture him and bring him up.

“But for me, you are talking of an adult, there are so many people I have nurtured. All over the state, they see me as a leader.

“But I have tremendous respect for my elders. I respect those who have excelled in various professions, even my juniors and the reality is that I was born to respect people and I will not disrespect anybody because I am governor. So when you say godfather, just take it out.

“Oshiomhole is working for me , he is campaigning with me because he is also passionate about his party winning Edo and you can’t take that away from him.”

BBNaija Housemate, Lucy Issues Warning To Nigerians Sliding Into Her DM To Tell Her How To Live And Behave
Recent Stories