Drama As President Threatens To Punch Reporter In The Mouth


A president is under fire after threatening to punch a reporter in the mouth for asking him a question. 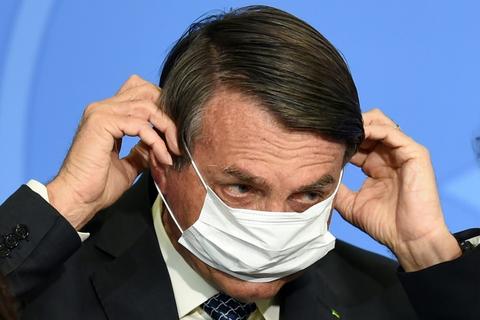 Brazilian President Jair Bolsonaro
The President of Brazil, Jair Bolsonaro shocked many people on Sunday after he threatened to punch a reporter repeatedly in the mouth after being asked about his wife's links to an alleged corruption scheme.
"I so want to pound your mouth with punches," the far-right president said when a reporter from O Globo, posed the question.
The reporter was part of a group that met Bolsonaro after his regular Sunday visit to the Metropolitan Cathedral in Brasilia. The president ignored protests from other journalists after the remarks and left without making further comments.
The O Globo reporter asked about a report in the magazine Crusoe linking First Lady Michelle Bolsonaro to Fabrício Queiroz, a retired police officer, friend of the president, and former adviser to her son Flavio Bolsonaro, who is now a senator.
Queiroz and Flavio Bolsonaro are under investigation for a scheme that allegedly swindled pay from government employees when the younger Bolsonaro was a regional lawmaker in Rio de Janeiro, and before Jair Bolsonaro became president in January 2019.
According to the magazine, Queiroz deposited funds in Michelle Bolsonaro's bank account between 2011 and 2016.
The first lady has said nothing about the case.
Soon after the president's outburst O Globo issued a statement repudiating his "aggression ... towards a journalist from our newspaper that was carrying out his job in a professional manner."
Such intimidation "shows that Jair Bolsonaro does not acknowledge the duty of a public servant ... to be accountable to the public."
Top Stories