Some hookers have reportedly descended heavily on an evangelist for preaching to them in Lagos. 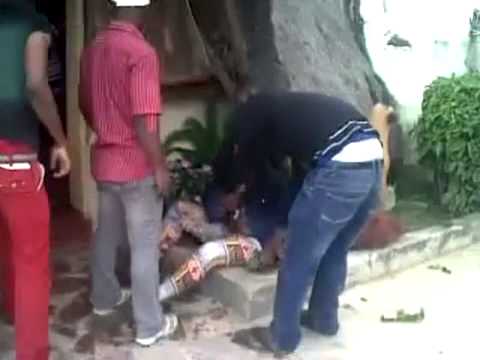 The preacher after being beaten by the prostitutes
A group of prostitutes have reportedly beaten a man of God to coma for daring to preach in front of their premises in Lagos.
Read the full report by Nigerian Defender below:
When Evangelist Mathew of a popular church in Ejigbo, Lagos, decided to carry out the great Biblical injuction that says: “Therefore, go and preach to all nations, baptizing them in the name of the Father and of the Son and of the Holy Spirit, and teaching them to obey everything I have commanded you”, little did he know that some aggrieved unrepentant sinners could go the extra mile of beating him silly like a common criminal.
Perhaps, in his many years of carrying out God’s work, Friday, Agust 14, would remain evergreen in his memory, as he met more than he expected from some irate commercial sex workers who believed his sermon within their premises was not healthy for their bed-to-wealth trade.
According to an eyewitness account of the public show of shame, Theresa Okwudili, trouble started for the 36-year-old man of God when he stood at a close range to Golden hotel, Ejigbo, and began preaching to the women of easy virtues and their male clients to forsake their sinful ways and turn to God for deliverance and salvation.
WWW.NIGERIADEFENDER.COM Gathered that irked by the Evangelist’s constant castigation of their flesh-trade, the red light district ladies were said to have murmured within themselves.
However, when it seemed to them that the preacher was not in hurry to end his sermon and leave, Hannah, said to be one of the most notorious members of the ‘quickie sex club’ decided to take the bull by the horns. “She angrily brought out a bucket of water and poured the man of God.
“As he was still trying to comprehend what was going on, another prostitute menacingly advanced towards him and started pushing him away. He was almost pushed to the gutter if not for the timely intervention of passers-by”, Okwudili narrated.
Providing more insights into the genesis of the brawl, Uchenna Kingsley, whose residence was adjacent to the brothel stated thus: “That was not the first day he was preaching at that place. But he didn’t use to get so close to the brothel premises as he did on this occasion. To me, I believe he overstepped his boundary because he knew the place was an unholy zone; he should have treaded more carefully”.
His usual sermons, according to Kingley were always tilted towards repentance. “Most times, if not all the times, he uses the Bible verse, 1 Corinthians 6: 18-20 which goes thus: ‘flee fornication! Every sin that a man doeth is without the body; but he that committeth fornication sinneth against his own body. Know ye not that your body is the temple of the Holy Spirit which is in you, which ye have of God, and ye are not your own? For ye are bought with a price; therefore glorify God in your body, and in your spirit, which are God’s’. He uses this verse interchangeably with Proverb 6 verse 32, which also revolves around fornication and adultery.
“These are ladies that resent anything called ‘the word of God’. Most of them even hate God. Their daily business is to smoke, drink alcohol to stupor and finally sleep with any available man for a price. It is their daily routine. Even though if anybody would convert them, as some have been converted, it’s not by forceful preaching and outright condemnation of their evil acts as the Evangelist was doing”, Kingsley further noted.
Although, all efforts to speak with the Evangelist hit the rock, it was gathered that he did not make any attempt to fight back the ladies, whom we were told he described as daughters of Jezebel. “He only said God will pay them back in threefold and left the scene with his audio gadgets and wet body”, the source hinted.
Top Stories