Nnamdi Kanu Reacts To Killing Of IPOB Members In Enugu


IPOB leader, Nnamdi Kanu has reacted to the bloody clash between IPOB members and security agencies that left many dead. 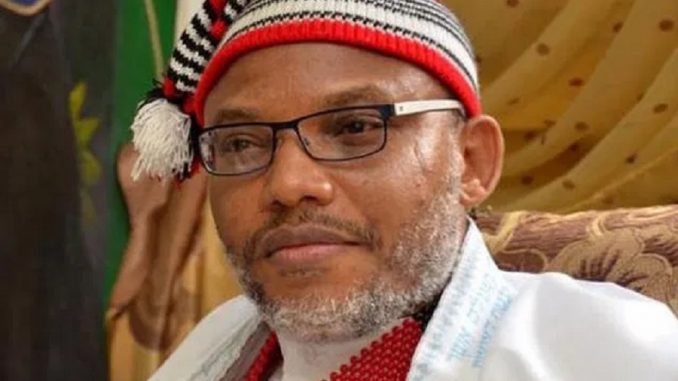 IPOB leader, Nnamdi Kanu
Leader of the Indigenous People of Biafra (IPOB), Mazi Nnamdi Kanu has broken his silence following the clash between members of his group and security agencies in Enugu.
Recall that about 21 members of the group reportedly died in the encounter.
Kanu in a statement issued by the Media and Publicity Secretary, Emma Powerful, titled, “The Enugu Massacre of 23rd August, 2020: An Open Letter to IPOB Worldwide”, said he acknowledged the enormous burden the struggle had brought on both members and non-members of the group.
He however called for resilience, assuring them of victory in no distant time.
The statement read, “As the formidable family of IPOB Worldwide continues to mourn our braves – the #Enugu21 who fell in Defense of Freedom, I bring you the sincerest words of comfort and fortitude from the very depths of my heart.
“I recognize the enormous burden this struggle has brought on our members and those that are not members but support what we do. Our various nuclear families have also suffered untold. I comfort and condole you all.
“The burden of restoring Biafra is herculean and it crystallizes in the constant danger of being killed by wanton acts of Nigerian State terror unleashed by a terrorist Federal government that has successfully cowed our elected and non-elected leaders.
“Since it’s now clear that those that call themselves your leaders are imprisoned by fear, I say to you – fear not; for victory and succor shall be ours in no distant future and any Biafran blood lost in this epic struggle will be requited manifold.
“I my most private moments – when I reflect on this struggle and its fallouts- I have often been tempted, like Christ, to ask that this cup be passed from me. I’m sure you all feel the same in many fleeting moments of despair that is common with the fragile human spirit.
“Yet, even as a mere mortal, I dare not relent because I know for sure that mine is a divine and generational call. I know that I must make this personal sacrifice for the collective and eternal good of our people. I ask you all to do the same, even as it is a great burden. A burden borne in blood, honor and self-denial.
“Thus, I shall persevere until Biafra is restored. I ask that you do likewise. For, it is only when we demonstrate to our enemies and friends alike – the sheer will of the human mind and the indomitable spirit to free ourselves that they can take us seriously.
“Yes, it’s true that we have no guns and no army but in the minds of our members lies the greatest weapon of all – the will to be free from domination and terror, the will to succeed, the will to survive, and the will to build one of the greatest nations that the world is yet to see. And soon to see.
“The Biafra that lies in your spirit, the Biafra that propels you to agitate – is the greatest weapon, far greater than any guns, bullets and battle tanks. Be strengthened in the assurance that you are not alone. You are a legion.
“Let this be clear: All that participate or assist in the unlawful taking of the lives of any Biafran will – thenceforth – be adequately requited through every lawful means available to us. Such lawful means include the right to self-defense, the right to repel every unlawful act of State and non-State terror.
“And to those of you – Biafran or not – who have chosen the path of indifference to the human carnage and fratricide that has become Nigeria of this era, I leave you with the poignant words of Elie Wiesel, who said:
“Indifference is not a response. Indifference is always the friend of the enemy, for it benefits the aggressor – never his victim – whose pain is magnified when he or she feels forgotten. And in denying their humanity, we betray our own”.
“Mr. Wiesel captures the true essence of true Biafrans. We are not indifferent. We are not indifferent to our own cause to be free, and the supreme sacrifices some of us have made, and still counting. It’s now up to compatriot humanity to enable us or deny their humanity by betraying us.
“So, as we mourn this latest mass murder of our people, let us all take some comfort that they didn’t die in vain, they died in honor, they fell in defense of freedom and their precious blood will be best requited by our collective and abiding resolve to never back down until Biafra is restored.”
Top Stories