A man has gotten more than he could chew after being nabbed by community members in Delta state. 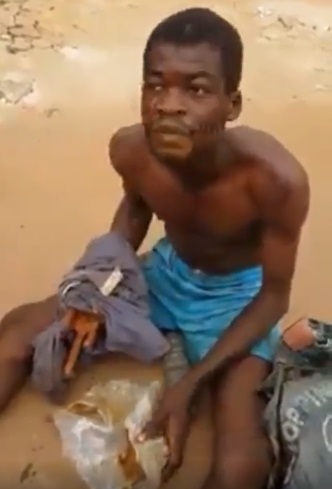 The suspect after he was arrested and forced to eat faeces in Delta
A suspected fraudster has been apprehended by angry community members in Okpanam, Delta state and forced him to eat faeces.
According to reports, the man who came into the Delta community from Anambra state was forced to eat the faeces after being caught with it by some vigilante members.
When interrogated by residents of the community, he affirmed that he needed the faeces for a money ritual purpose.
Here is the video below:

Delta state. The suspect reportedly came into the Delta community from Anambra state and was caught red-handed in the act by some vigilante members