Details have emerged how a man died of asphyxiation after police placed a hood over his head. 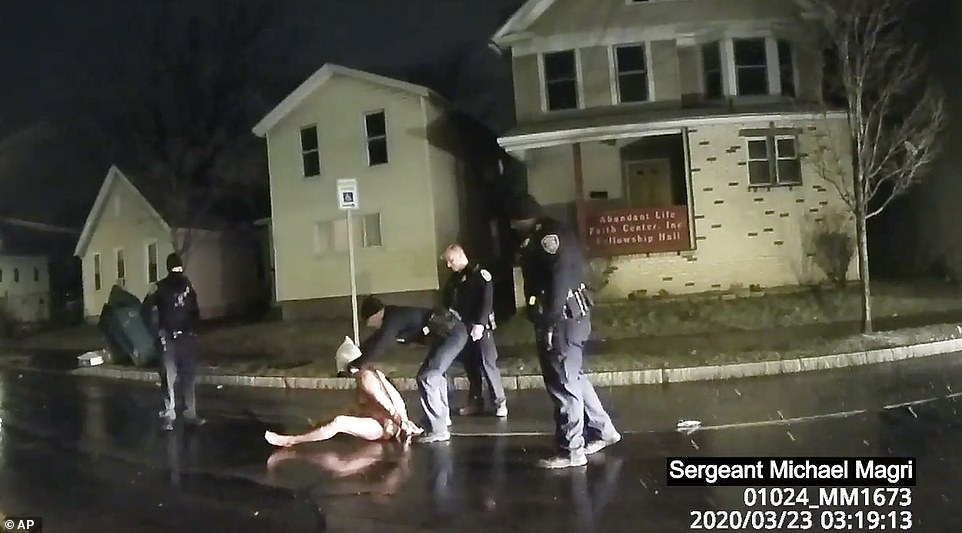 Daniel Prude
Protests are taking place in upstate New York after a newly surfaced video revealed how a 41-year-old black man died after being suffocated to death by the police.
It was gathered that the black man died of asphyxiation in March after a group of police officers put a hood over his head, then pressed his face into the ground until he stopped breathing.
According to Dailymail, Daniel Prude was left brain dead after the incident and later died on March 30 when he was taken off of life support – seven days after the encounter with police in Rochester.
The medical examiner ruled his death a homicide, caused by ‘complications of asphyxia in the setting of physical restraint, excited delirium [and] acute phencyclidine [PCP] intoxication.’
While the fatal incident occurred on March 23 – weeks before George Floyd would die in Minnesota police custody in May, sparking nationwide protests – Prude’s death received no public attention.
However, that changed on Wednesday when his family held a news conference to reveal disturbing police body camera footage of Prude’s final moments, along with written reports they obtained through a public records request.
‘I placed a phone call for my brother to get help. Not for my brother to get lynched,’ Prude´s brother, Joe Prude, said at a news conference Wednesday. ‘How did you see him and not directly say, “The man is defenseless, buck naked on the ground. He´s cuffed up already. Come on.” How many more brothers gotta die for society to understand that this needs to stop?’
Protesters gathered Wednesday outside Rochester's Public Safety Building, which also serves as its police headquarters. Demonstrators remained as night fell, demanding for the officers involved to be charged with murder.
WHEC reported that nine people were arrested during the day, most for criminal trespass or resisting arrest, and one for also inciting a riot. One activist was taken to hospital to be treated for injuries sustained during their arrest.
The deadly encounter began at 3:15am on March 23, when Joe Prude dialled 911 to summon assistance for his brother, who was suffering an acute mental health episode on the 400 Block of Jefferson Avenue.
Prude had left his brothers home moments earlier wearing only long underwear, a tank top and socks. He then began making his way down West Main Street and removed the rest of his clothes.
Police said they believed Prude had been smashing windows down West Main as he walked, before officers encountered him. A number of bystanders crossed paths with him before officers arrived, with at least one dialing 911 to report his erratic behaviour.
Prude was then stopped by Officer Mark Vaughn from the Rochester PD at 3:16pm. Vaughn, pointing a taser, ordered him to lay on the ground and put his hands behind his back, to which he complied.
Officer Vaughn then handcuffed Prude as he lay on his stomach. Prude then begins to yell and spit as he lies completely naked on the snow covered ground.
Around three and a half minutes into the body camera footage, one of the officers places a mesh hood over Prude's head, after he attempted to spit at officers, allegedly telling them he had COVID-19. New York, once the US epicentre of the virus, was in the early stages of the pandemic at the time.
A delirious Prude is then heard yelling incoherently at the officers, shouting ‘Jesus Christ’ and ‘Give me your gun, I need it'. At one point, he invites officers to ‘come and look at this big d***,’ to which the cops on scene respond with laughter.
Officers stood around Prude in a semicircle, body camera footage shows. Prude continued to yell at officers and at one point attempted to get to his feet. Officers were seen pushing him back over and then slamming his head into the ground.
Prude demanded they remove the spit hood, saying, ‘trying to kill me!,’ before making muffled, anguished sounds from under the hood.
For more than two minutes, officers pinned Prude down on the cold ground. Officer Vaughn used both hands to push the side of Prude’s head into the pavement, in a push-up position with his knees suspended off the ground.
Another officer used his knee at one point to hold down Prude’s torso, and a third held down his legs.
Prude is heard screaming under the weight of the officers pinning him down, however his words are muffled as his face is pushed hard into the ground. Officers are heard urging him to ‘stop spitting’.
The officers appear to become concerned when they notice water coming out of Prude’s mouth.
‘Is he puking? Ugh, he’s puking, just straight water. You see all that water that came out of his mouth? My man, you puking?’ Officer Troy Talladay says.
‘Oh man look at his f***ing…’ Talladay continues, before being cut off by laughter heard in the background of the video.
The 41-year-old then suddenly falls deathly silent and still, having lost consciousness under the restraint.
One officer notes that he’s been out, naked, in the street for some time. Another remarks, ‘He feels pretty cold.’
When EMTs arrive on scene, the officers unhandcuff Prude, roll him on his back and attempt chest compression after realizing he has no pulse.
The EMT tells cops not to worry since PCP causes ‘excited delirium’ and says ‘I guarantee you that’s why he coded,’ adding, ‘It’s not your fault guys.’
The medics continue performing CPR on Prude before he's loaded into an ambulance, some 11 minutes after he first encountered police.
He was taken to the hospital and placed on life support, where he was later pronounced brain dead. He died seven days later on March 30.
Watch video:
Top Stories