Nigerian musician, Burna Boy has expressed excitement after his girlfriend gave him a diamond chain. 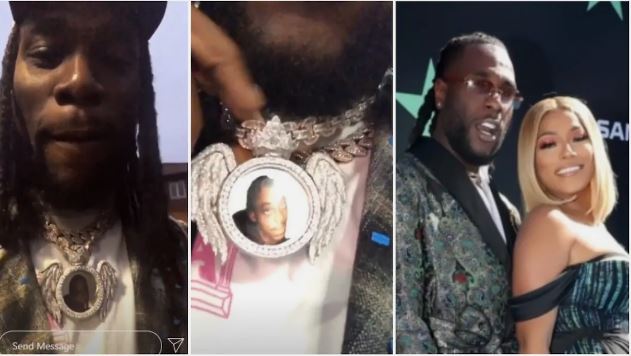 Burna Boy shows off chain his girlfriend bought for him
Nigerian singer, Damini Ebunoluwa Ogulu, popularly known by his stage name Burna Boy has flaunted an expensive diamond chain his girlfriend, Stefflon Don got for him.
Burna Boy who shared the video on his Instagram page, showered praises on his lover, while he urged his followers to get a lover like Stefflon Don.
He said,
“look what my wife got for me
“you need a wife like my own, see my sweetim”
However, Burna calling Stefflon “ his wife” has raised an eyebrow, as fans wonders if the couple are secretly married.
Burna Boy’s girlfriend is a British singer Stephanie Victoria Allen, known professionally as Stefflon Don who the singer has been dating for 2 years.
Shortly after flaunting the necklace for his fans to see, he showed off his beautiful girlfriend, who was sitting in the car and blushing.
Stefflon gave the African giant crooner a new ice “Gambo” chain, in memory of his best friend.
A close look at the pendant of the neck-piece shows a photo of Burna Boy’s late best friend, Gambo.