The protesters later moved to the administrative block but there was no university official to receive them. 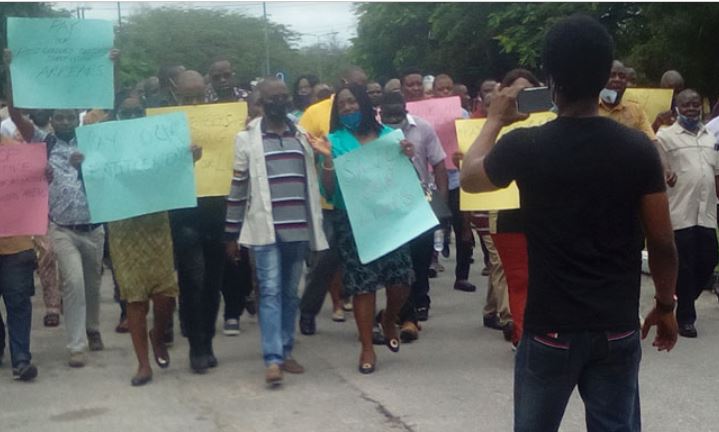 According to a report by The PUNCH, hundreds of placard-carrying members of the Academic Staff Union of Universities, University of Calabar branch, on Wednesday, protested the unpaid local entitlements spanning over six years.

ASUU UNICAL Chairman, Dr. John Edor, led the protest from the main campus in Calabar to the main gate of the university, where he addressed the lecturers.

The protesters later moved to the administrative block but there was no university official to receive them.

The lecturers carried placards such as ‘Our members dying, save our lives’, ‘Pay our promotion arrears,’ ‘pay our entitlements,’ and ‘Stop selective implementation of promotion’ among others.

Speaking with journalists after addressing the lecturers, Edor said, “Our grievances are that for a number of years now members of ASUU, University of Calabar Chapter have been working and our entitlements have not been paid to us.

“Such entitlements include the teaching of GSS Courses, Graduate Thesis Supervision Allowance, CES Courses, Sandwich programmes, Pre-degree and promotion arrears. Some of our members had been employed and they commenced payment of their salaries but a backlog of their salaries is left unpaid and that is what we call salary arrears.

“Even if the federal government has refused to pay our salaries what we have earned which is not one, two, or three but some are running into five, six years should be immediately paid to us.

“We have been asking for our entitlements for long but the COVID-19 pandemic has compounded our vagaries and vicissitudes.

“The lockdown has made it impossible for us to go and source for other legitimate means of livelihood to feed our families.”

According to him, the protest is only the beginning and if their entitlements were not paid, the lecturers will commence ‘Operation Occupy UNICAL’.

Edor said it did not matter how long they were owed, adding that “no kobo will be lost. The peaceful protest will end only when every arrear is paid. They should not wait for us to cry again before our entitlements are paid.”

The university will select a new Vice-Chancellor on Thursday, as the five-year tenure of Prof Zana Akpagu, comes to an end.