Kiki Mordi Accuses Her Friend And Fellow Journalist, Oluwatosin Adeshokan Of Being A Predator Who Harasses Young Girls After Gaining Their Trust


Kiki said the women who are his alleged victims were afraid to reach out to her for since she is his friend and they thought she would take his side. 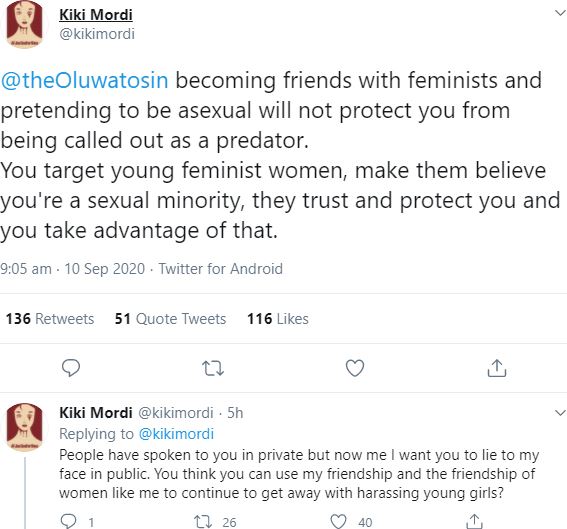 Popular journalist, Kiki Mordi took to Twitter to call out one of her friends after discovering that he allegedly harasses young girls.

Kiki claims Oluwatosin Adeshokan, a freelance journalist whose works have been published in The New York Times, The Los Angeles Times, VICE, CNN, Quartz, The Africa Report and more, pretends to be "asexual" just to gain women's trust before taking advantage of them.

She said a number of women who are his alleged victims were afraid to reach out to her for help since she is his friend and they thought she would take his side.

She added that action will be taken against him, irrespective of her relationship with him.

Other women also spoke out, alleging that he harassed them after gaining their trust.

Accusing Oluwatosin, Kiki wrote: "@theOluwatosin becoming friends with feminists and pretending to be asexual will not protect you from being called out as a predator. You target young feminist women, make them believe you're a sexual minority, they trust and protect you and you take advantage of that.

"People have spoken to you in private but now me I want you to lie to my face in public. You think you can use my friendship and the friendship of women like me to continue to get away with harassing young girls?

"Best believe action WILL be taken! If Tosin has ever been inappropriate with you and you felt like you couldn't talk to me because we were friends I implore you to fuck that and reach out! Action WILL be taken! No safe space for predators. Certainly not within my circle!"

Below are screenshots of Kiki's accusation and reaction from some women who claim to be his victims; 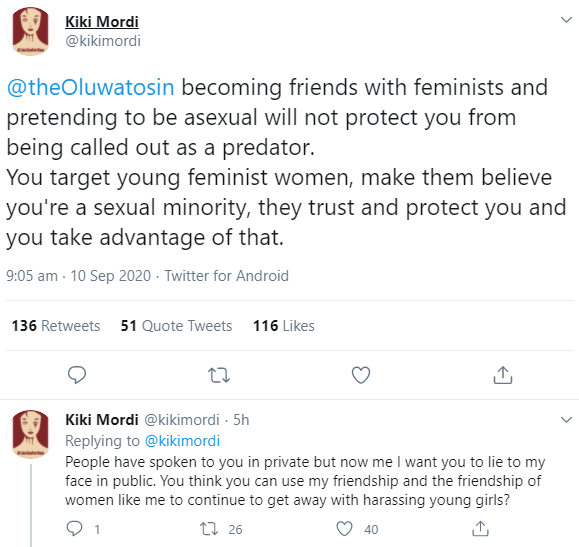 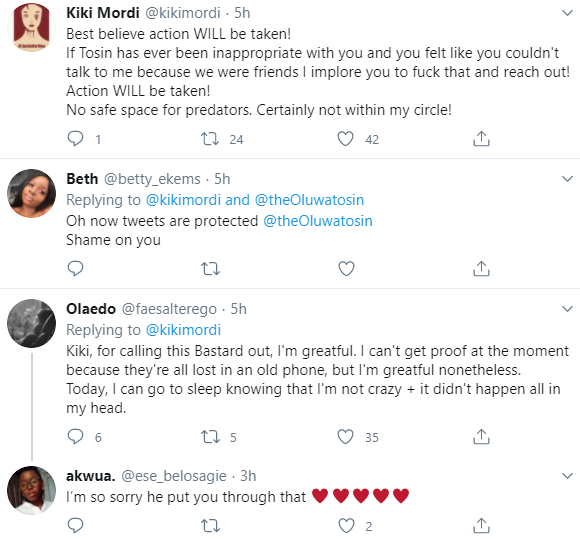