A lawmaker who sponsored the bill that has caused controversy in the state allowing the governor to detain anybody for as long as he wants has cried out. 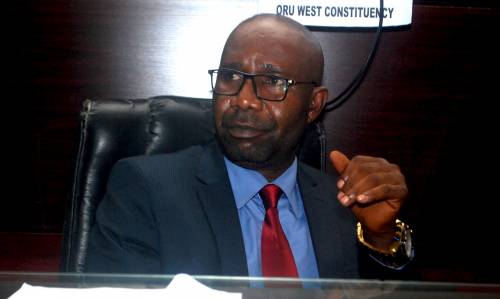 Frank Ugboma
Honourable Frank Ugboma, Deputy Minority Leader, Imo State House of Assembly, who sponsored the recently signed Imo State Administration of Criminal bill No 2 of 2020 (ISACJL, 2020) has cried out saying that the bill was altered.
Recall that Governor Hope Uzodinma on Thursday signed into law the ISACJL, 2020, which empowers him to arrest and detain any resident of the state for as long as he wishes.
According to Sahara Reporters, Ugboma, who spoke after the bill was met with wide criticisms, said some sections were sneaked into the bill by some unknown individuals.
Describing the development as a “rude shock”, Ugboma stated that the bill had 372 sections, noting that the controversial section that empowers the governor to arrest and detain contravenes the fundamental rights guaranteed by the constitution.
He said, “For the avoidance of doubt, the Bill I presented had about a total of 372 sections. How and where it was amended, recreated and reshaped into Section 484 and beyond remains a mystery and a legislative wonder of our time as what I presented and circulated to my colleagues during plenary, both in the first and second readings did not contain such obnoxious and embarrassing Section 484. Neither was it deliberated in the House Committee of the whole. It indeed never existed in the House.
“No one has been able to explain to the members of the 9th House how and at what stage the said Section 484 was inserted into the Bill. It smacks of an evil manipulation to throw Imo people into the dungeon.
“This particular provision is a nullity ab initio in view of the unambiguous provisions of sections 1(1),(3),4,5,6 and 36 of the 1999 constitution of Nigeria (as Amended). This is very appalling.”
The lawmaker said he had requested that the state Assembly constitute a committee to ascertain how such horrendous act was done.
He noted that he has forwarded another bill to amend the one assented to by the governor.
“This was not the Bill I presented and sponsored.
“In the manuscripts that I received after each hearing and which I have compared with that given to my colleagues, there is no hand of Esau.
“This has informed my view and I have forwarded a Bill for the immediate amendment of those offensive and draconian sections,” he added.
According to documents seen by SaharaReporters, any person detained on the orders of Uzodinma can only be released when he grants a license to the said individual.
It also abolished all forms of preliminary inquiry or preliminary investigation into a criminal charge by a magistrate or any court in the state and replaced them with preparation of proof of evidence.
Top Stories