A soldier who said he was innocent after being punished for allegedly stealing a phone has killed himself. 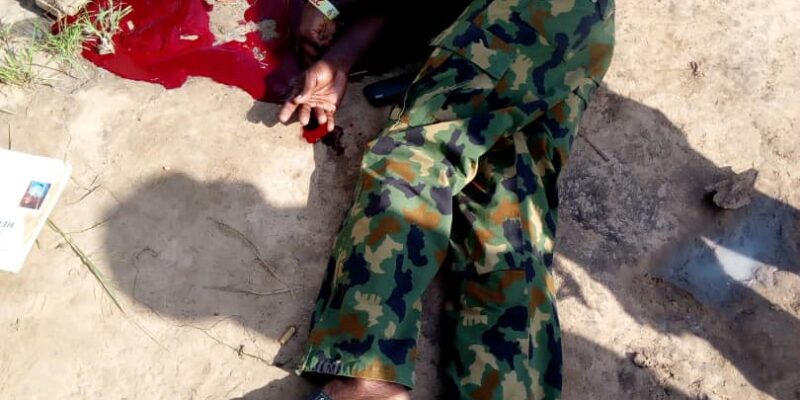 Soldier commits suicide
Details have emerged showing how a soldier in Northeast Nigeria committed suicide, on Thursday, after he was publicly punished by his superior for alleged phone theft, a report by Premium Times has revealed.
The soldier, identified as Lance Corporal Victor Ojeamiran, was attached to the Nigerian Army 27 Task Force Brigade in Buni Gari, Gujba Local Government Area of Yobe State.
The 27 Task Force is one of those fighting the Boko Haram extremists in Northeast Nigeria.
Mr Ojeamiran shot himself after he personally submitted a note to his platoon sergeant for delivery to his superior officer in the Task Force, our sources said, asking not to named for fear of victimisation by the army.
The note was a protest note where the soldier tried to defend himself and prove his innocence, PREMIUM TIMES learnt.
Buni Gari is said to be about 7 km from the headquarters of the 27 Task Force Brigade in Buni Yadi, the town that also accommodates the Nigerian Army Special Forces School in Gujba local government.
What really happened
The deceased went to Damaturu, the Yobe State capital and bought a used phone, our sources said. Unknown to him, the phone was a stolen phone and belonged to a senior army officer in Damaturu.
The officer tracked the phone and found it with the soldier while he was about to return to his formation in Buni Gari, after he bought the phone.
The officer allegedly punished the soldier in public, while residents of the area shot videos of the punishment and later posted it on some social media platforms.
Mr Ojeamiran could not bear the disgrace of the video of him being publicly punished for a ‘false accusation’ and he did not have a chance to defend himself before the punishment, our sources said.
He told his colleagues, including one of our sources, that he does not know what to tell his wife and children about the video, and how he was disgraced in the eyes of the world for a crime he did not commit.
Hence, he decided to take his life after he returned to base by shooting himself on the head.
When contacted, the army spokesperson, Sagir Musa, said he is yet to be briefed on the development and he is not in Yobe at present.
When PREMIUM TIMES, on Saturday, contacted the spokesperson of the 27 Task Force, Chinonso Oteh, a lieutenant, he promised to get back to this reporter with an official position. He has ignored subsequent calls and messages to his phone since then.
However, PREMIUM TIMES has seen an internal memo by the army confirming the suicide but claiming it occurred on Sunday, September 20. In the memo, the army said an “investigation has commenced on the circumstances that led to the incident.”
Top Stories

''In This Nigeria, You Have No Idea What You Would Wake Up To'' - OAP Dotun
Recent Stories