There are indications that APC national chairman, Bola Tinubu might thrown his support for Osinbajo's presidential ambition. 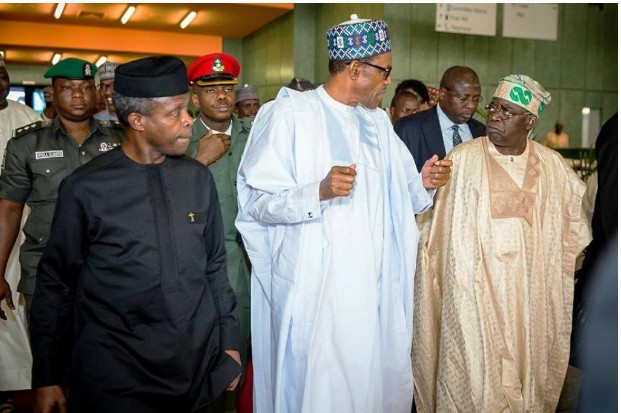 Osinbajo, Buhari and Tinubu
According to Daily Independent, some powerbrokers in the ruling All Progressives Con­gress (APC) have began mounting pressure on Asiwaju Bola Tinubu, national leader of the party, to bury his rumoured presidential ambition in 2023 and support  Vice Pres­ident Yemi Osinbajo to be the president in 2023.
Even though Tinubu is yet to declare whether he will run in 2023 or not, a lot of his supporters believe he is very much interested in the race and his silence is borne out of his desire not to distract the government of President Muhammadu Buhari, who is yet to mark two years of his second term in office.
However, some of his sup­porters have been launching several groups, both at home and in the diaspora, to rally support for his ambition, saying it is non-negotiable.
Also, some prominent Nigerians have also been canvassing support for Tinu­bu’s presidential ambition, saying he is the best man to succeed President Buhari in 2023. They include Baba­chir Lawal, a former Secre­tary to the Government of the Federation (SGF); elder statesman, Tanko Yakassai, Senator Abdulfatai Buhari, Chief Henry Ajomale and several others.
Daily Independent gath­ered that prominent lead­ers of APC have resolved to zone the position of national chairman to the North while the presidency will be zoned to the South, with many of them agreeing in principle that it will be unfair for the North to retain the position after President Buhari must have completed his eight years.
It was also learnt that many of the party leaders, es­pecially in the Northern bloc of the country, are favourably disposed to Osinbajo taking over from Buhari based on his loyalty, commitment and deep knowledge of the pro­grammes of the government, especially relating to the man­agement of the economy.
According to a credible source in the party, “There is no doubt Asiwaju is inter­ested in the 2023 presidential race. He has every right to do so and he is very qualified based on his record as a for­mer senator, governor of La­gos for eight years and what he has been able to achieve nationally even after leaving office.
“But for many of us, we believe that if the presidency is zoned to the South and lat­er micro-zoned to the South- West, the current vice presi­dent should be allowed to take over from the president. We have adduced so many rea­sons for this".
“The first is that he has been tested before and he has proven that he has the exper­tise to manage the affairs of a diverse nation like Nigeria. We are all witnesses to what happened in 2017 when Pres­ident Buhari was ill and the vice president presided over the affairs of the nation in acting capacity.
“That was a period when Nigeria was almost at the precipice with many groups in the country, especially the proscribed Indigenous Peo­ples of Biafra (IPOB), seeking self-determination. He was able to manage the situation very well to the admiration of the whole country and even the president commended him upon his return to the country.
“There are also other fac­tors we are putting into con­sideration. Three of these fac­tors are age, religion and his unblemished public record. The vice president is 63 now and will be 66 by 2023. He will be a blend between the young­er and older generation and many youths already see him as one of their own.
“On the issue of religion, we all know the two major re­ligions in this country are Is­lam and Christianity. It will be awkward if we allow anoth­er Muslim to take over from President Buhari in 2023. I doubt if that will be fair to our brothers in the Christian faith".
“However, 2023 is still a long way from now and the president will not impose a successor. We the party lead­ers will also not do likewise. We can only appeal to the likes of Asiwaju and present these facts before him.
“One thing is certain, the APC presidential ticket will not be handed over to anyone on a platter of gold. At the end of the day, everyone will be asked to go to the field and test their strength. Whoever wins the party’s ticket, then good luck to him”, he said.
Speaking with our cor­respondent, a senior lawyer from the South-South, who is also a member of the APC, said he personally advised Tinubu to maintain his re­spect as national leader of the APC and support one of the boys he has mentored po­litically, especially Osinbajo whom he (Tinubu) nominated as running mate to Buhari in December 2014.
“We used to be very close and I have offered him advice in time past. I once advised him to remain as the party’s national leader and nominate one of his boys as president. A lot of people said Buhari has relegated him but I believe Osinbajo as a man of God and gentleman won’t do that. I said he will even have more influence in the government compared to what is hap­pening now. But I believe he wasn’t receptive to the idea and we have not been talking again,” he said.
Top Stories