It was a night riddled with accusations and counter-accusations as both candidates sought to win the hearts of millions of Americans. 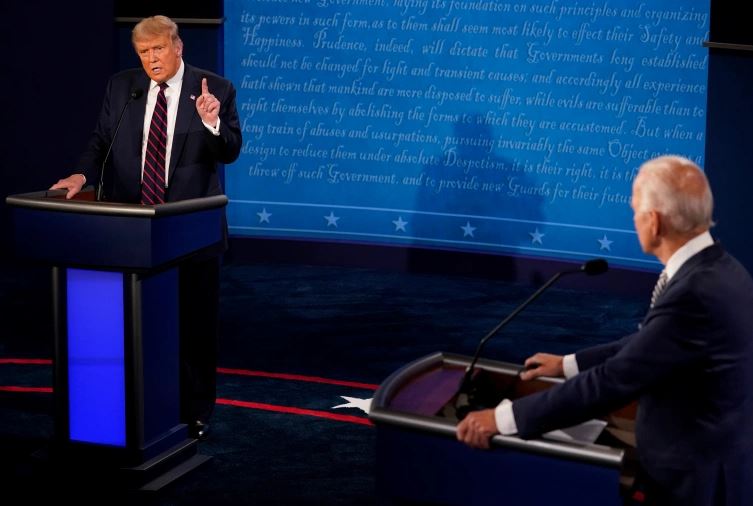 It was a night riddled with accusations and counter-accusations as both candidates sought to win the hearts of millions of Americans, even as the November 3rd election approaches.

Read the Full Report by BBC

"In a debate that was the political equivalent of a food fight, the winner was the man who emerged least covered in slop.

On Tuesday night, that man was Joe Biden – if only because his main goal was to prove to Americans that he could hold up under pressure, that he had not lost a step due to his advancing age. He had to show he could take a pie to the face, metaphorically speaking, and keep his cool.

He mostly met that standard, although it was at least in part because Donald Trump, by his constant hectoring and interruptions, seldom gave the former vice-president a chance to say something truly damaging to his own cause.

Twitter Trump, the unconventional, bombastic, insulting and rumour-mongering aspect of this president was on full display throughout the hour-and-a-half event. Unfortunately for the president, many Americans, even his own supporters, find his social media persona one of his more unattractive attributes.

Trump needed this debate to shake up a race that is tilting against him – and which has been remarkably stable, through economic, health and social adversity.

Nothing about this free-for-all seems likely to alter the dynamics of this contest or change the minds of the one in 10 American voters who say they are still undecided (although perhaps they’ll resolve never to watch another one of these).

It was clear early on what kind of “debate” this would be. Donald Trump’s objective was to rattle Joe Biden and he planned to do it by constantly interrupting the former vice-president.

By CBS News’s count, Trump cut in on Biden a total of 73 times.

That made for a series of chaotic exchanges, which included Trump questioning Biden’s intelligence and Biden calling Trump a clown, shushing him and asking, indignantly, “Will you shut up, man?”

Time and time again, Trump would snipe at Biden, leaving the Democrat laughing and shaking his head.

As moderator Chris Wallace announced that the coronavirus was the next topic and that both candidates would have two-and-a-half uninterrupted minutes to answer, Biden quipped: “Good luck with that.”

Moderating this prestigious primetime event may have been the worst job in America on Tuesday night.

The coronavirus was always going to be difficult terrain for the president  and the topic came up early in the debate. Trump had to defend a pandemic response that has resulted in more than 200,000 American deaths. He did so by saying the steps he’s taken prevented more deaths and suggesting Biden would have made things worse.

Biden’s reply was to talk directly at the camera, asking the viewers if they could believe Trump (polls indicate a majority of Americans disapprove of Trump’s handling of the pandemic).

“A lot of people died and a lot more are going to die unless he gets a lot smarter, a lot quicker,” said Biden.

In one telling exchange, Trump boasted about the size of his campaign rallies, held outside because that’s what the “experts” with emphasis on that word suggest. He then said Biden held smaller rallies because he couldn’t attract larger crowds.

That back-and-forth demonstrated a fundamental difference in the way the two candidates view the pandemic and whether the situation is getting better or worse.

Race, white supremacists and the suburbs

A debate format that lumped together race issues and urban violence led to feisty exchanges that made clear Biden was more comfortable talking about the former, while Trump wanted to discuss the latter.

Biden accused the president of fomenting racist divisions, while Trump swiped at Biden’s support for a 1993 anti-crime bill that led to higher incarceration rates for blacks.

Biden would later go on the attack against Trump for saying Democratic-backed housing proposals meant to increase diversity were threatening to destroy the suburbs of American cities.

“This is not 1950, all these dog-whistles and racism don’t work anymore,” Biden said. “The suburbs are by and large integrated.”

He added that the real threat to the suburbs was Covid-19 and climate change.

Trump was offered the chance to directly renounce right-wing violence from white supremacists and militias. He said he would, but then he didn’t, instead telling one far-right group, the Proud Boys, to “stand back and stand by” (an answer the organisation has subsequently celebrated).

Trump then pivoted to attack antifa, a loose collection of anti-fascist activists, and left-wing mobs.

When Biden was asked about whether, as the self-professed leader of the Democratic Party, he had called on the mayor of Portland or the governor of Oregon to take steps to stop the unrest in that city, he demurred, saying he no longer held elective office.

Wallace had given both candidates a chance to cut against their own bases, which can at times be a wise political strategy. Instead, they both dodged and danced.

The death of George Floyd and resulting conversations about institutional racism and police violence led to mass demonstrations the likes of which the US has not seen in decades.

Trump touts his record of getting things done

If there’s a message the Trump campaign wanted Americans to take away from this debate – a clip that was tweeted out from the president’s account even as the debate was ongoing – it’s that Joe Biden had almost half a century in public office to solve the problems facing the country, and those problems are still around.

In 2016, Trump successfully ran against Washington and the status quo. Doing so again after sitting in the Oval Office for three and a half years was always going to be a challenge, but the way he might pull it off is by using Biden’s longevity in public life against him.

‘I’m the Democratic Party, not Bernie’

One of Trump’s goals during this debate and throughout the whole campaign has been to paint Biden as beholden to the left wing of his party. Biden, in his very first exchange with the president, outlined his defence.

The opening topic for tonight’s debate was the Supreme Court, but Biden quickly turned the discussion to the Affordable Care Act which is at risk because of a pending case before the high court.

Trump tried to accuse Biden of supporting “socialised medicine” and pushing to do away with private insurance, prompting the Democrat to say that wasn’t in his plan and he’s the one who won the Democratic presidential nomination.

The tactic re-emerged later on, during an exchange on climate change, when Trump tried to tie Biden to the massive spending and regulation proposals in the “Green New Deal” programme embraced by many on the left.

Biden, in drawing distinction with progressives in his party, seemed confident that his left flank would hold when it was time to vote.

Biden fails to hurt Trump on his ‘hidden taxes’

When the New York Times story about Trump’s taxes broke on Sunday night, it was viewed as a bombshell – the public was finally getting a look at information the president had, in a break with tradition, withheld for years.

Political analysts and prognosticators wondered how Trump would handle this during the debate.

When the topic came up, however, Donald Trump offered a similar defence to the one he provided in 2016, when he boasted how he knew the tax code better than any previous candidate and his ability to avoid a larger tax bill was simply his taking advantage of the law.

Biden, for his part, tried to turn the topic into a condemnation of Republican-passed tax reform. While he noted that Trump paid less in federal taxes than schoolteachers, that message which could have been a powerful attack got buried in an ensuing scuffle with the president.

If Trump’s tax returns have any legs as an issue in this campaign, it won’t be because of this debate.