Photo Of Two Siblings, Four Others Jailed For Internet Fraud In Sokoto


Two siblings who engaged in internet fraud alongside others have been jailed by a court. 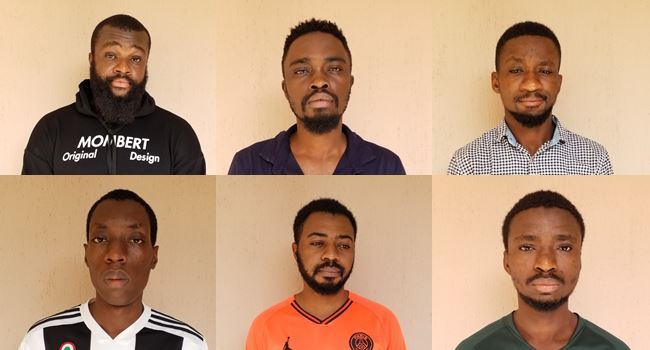 The internet fraudsters sentenced to prison by a court
A Sokoto State High Court has sentenced two siblings identified as Chukwuka popularly known as Manfred, and Shedrack Nwanaforo to 10 years and six months’ imprisonment over internet fraud.
The court presided over by Justice M.S Sifawa convicted alongside four others, Henry Uche, aka Andrew Tucker James; Okereke Daniel; Iyiola Azuka; and Onyeiwu Chibuike, aka Jonathan Stavidris.
It was further learnt that the convicts were arraigned before the court by the Economic and Financial Crimes Commission on separate counts bordering on conspiracy and cheating.
They all pleaded guilty to the charges.
Uche was sentenced to 10 years with an option of N1m fine by Justice Sifawa following the plea of the convicts.
The court ordered Uche to return the sums of €3,934 and $17,691.25 to his victim through the EFCC and the Federal Bureau of Investigation liaison at the United States of American Consulate, Lagos.
According to a statement by the Head of Media and Publicity, EFCC, Wilson Uwujaren, Daniel was sentenced to five years and six months in prison on the two counts he was charged with, with an option of N100,000 fine on each count.
Daniel was also ordered to return the sum of €300 to his victim.
Azuka was sentenced to 10 years’ imprisonment with an option of N1m fine and ordered to return the sum of €1,545 to his victim, while Chibuike and Chukwuka were jailed for 10 years each with an option of N1m fine each; they were also ordered to return the sum of €5,000 or its equivalent in naira to their victims through the EFCC.
Chukwuka, who had earlier been jailed for 10 years by the court, was also sentenced to another six months’ imprisonment alongside his brother, Shedrack, with an option of fine in the sum of N100,000.
One of the charges read, “That you, Henry Chukwuma Uche, aka Andrew Tucker James, a Nigerian national, sometime between 2018 and 2020 at Sokoto, within the jurisdiction of the Sokoto State High Court, dishonestly represented yourself to one Carle Margarida Brito Santos, a foreign national resident in Portugal, to be one Andrew Tucker James of the United States of America’s Marines deployed in Afghanistan and in that, induced her in a love scam to pay you the sum of €3,934 through your Access Bank dollar account and the sum of $17,691.25 through your Polaris Bank dollar account, thereby committed the offence of cheating contrary to Section 310 of the Sokoto State Penal Code Law, 2019, and punishable under Section 311 of the same law.”
Top Stories