Trump will be moved to a special suite at Walter Reed National Military Medical Centre in Bethesda, Maryland, for the next few days. 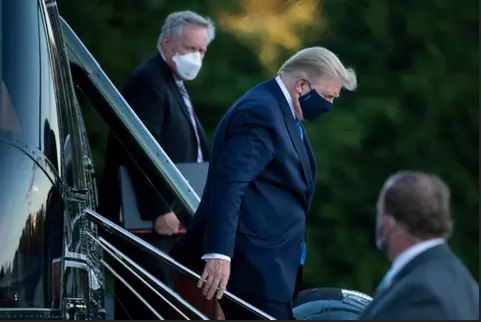 White House Chief of Staff Mark Meadows (L) watches as US President Donald Trump (C) walks off Marine One while arriving at Walter Reed Medical Center in Bethesda, Maryland on October 2, 2020. - President Donald Trump will spend the coming days in a military hospital just outside Washington to undergo treatment for the coronavirus, but will continue to work, the White House said Friday (Photo by Brendan Smialowski / AFP)

U.S. President Donald Trump is moving to a military hospital for treatment after being diagnosed with COVID-19, the White House said on Friday, as his administration and election campaign scrambled to adjust to an extraordinary twist in his turbulent presidency.

Trump, 74, will be moved to a special suite at Walter Reed National Military Medical Centre in Bethesda, Maryland, for the next few days as a precautionary measure, White House press secretary Kayleigh McEnany said.

“Out of an abundance of caution, and at the recommendation of his physician and medical experts, the President will be working from the presidential offices at Walter Reed for the next few days,” she said in a statement.

Trump has a mild fever, according to a source familiar with the matter. White House doctor Sean P. Conley wrote in a memo that he is “fatigued but in good spirits.”

It was the latest recent setback for the Republican president, who is trailing Democratic rival Joe Biden in opinion polls ahead of the Nov. 3 presidential election.

Trump, who has played down the threat of the coronavirus pandemic from the outset, wrote on Twitter earlier on Friday that he and his wife Melania were going into quarantine after testing positive for the virus, which has killed more than 200,000 Americans and severely damaged the U.S. economy.

An active Twitter user, Trump has not posted any messages since then.

Trump is at high risk because of his age and weight. He has remained in apparent good health during his time in office but is not known to exercise regularly or to follow a healthy diet.

Conley said Trump has received a single dose of Regeneron’s polyclonal antibody cocktail, a technique that is used for treating a wide range of illnesses.

Data is limited on its effectiveness for COVID-19 but U.S. infectious disease chief Dr. Anthony Fauci is among those saying it has promise.