Ahmed Suleiman Wambai has said a revolution is needed to tackle corruption in Nigeria well enough. 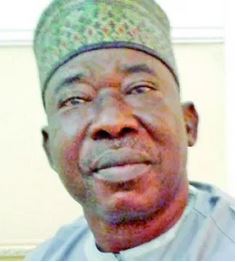 Ahmed Suleiman Wambai, the immediate past National Vice Chairman, North Central, APC, has said the only way to solve the problem of corruption in Nigeria is to kill those who are corrupt.

He said a revolution is needed to tackle corruption in Nigeria.

“There is so much corruption in the land and the only way to kill it is by revolution. Anybody found guilty of corruption should be killed.

“I cannot imagine how this country will be in the next 20 years considering the fact that corruption is permeating the lives of the youths and children,” he said in an interview with the Sun.

According to Wambai, Buhari alone could not fight corruption.

“President Buhari came when this country was heading to the point of no return. The healthcare, social services, leadership, human dignity were all lost. There was so much decay in the country due to the 16 years misrule.

“People from all corners of the country looked up to Buhari as a man of integrity, honesty. But there was a problem along the line. When he came with all the high expectations, nobody thought the situation will be like this. There was collapse in the economic indices. There was sharp drop in the price of crude oil in the international market.

“He could not do any magic to change the narratives of the market equilibrium of price fluctuation in the global market. But Nigerians failed to understand that Buhari was handicapped in dealing with the forces controlling the crude oil in the market. The good thing is that nobody can accuse Buhari of lacking in integrity, or that he is a corrupt leader,” he said.

According to him, “The biggest problem we have is the failure to realise that Buhari cannot be the governor of Nasarawa, Bauchi, Kano, Lagos and other states in the country. Corruption is already enshrined in our political system; economic, social and religious systems, including the clergies of the country.

The clergies and Ulamas are corrupt and Buhari cannot change them overnight. The biggest danger facing this country is that everybody is chasing wealth and riches. If only government will take strong stand against corruption so that whoever that is corrupt should be sanctioned heavily. If they do it successfully in China, we have to imitate the China model to live above board.

“If political leaders should imitate Buhari, all the Ministers, Judges, heads of agencies will not be found wanting. We are becoming inherently sick otherwise, how can someone steal money as huge as N1 billion or $1 million? We have seen Nigerians with oil wells, estates, other investments, yet they are not resting. Surprisingly, whether they got them fraudulently or genuinely, they won’t invest in areas to help the people.”

He added religious and tribal differences were others constituting major problems facing the country.