At the end of the event, Akeredolu declined the request to either shake hands, touch elbows or embrace his ZLP opponent, Agboola Ajayi. 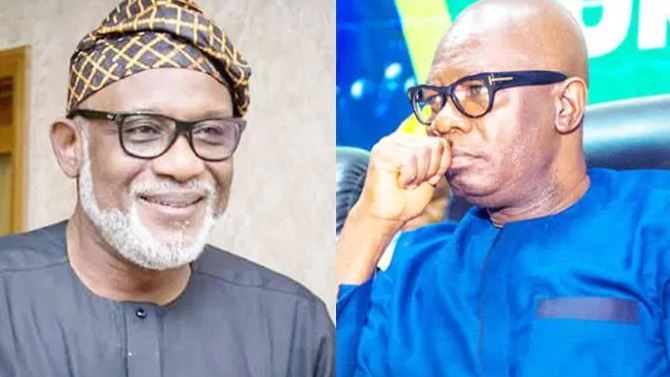 After signing a peace accord ahead of the 2020 Ondo State governorship election, Ondo state Governor, Rotimi Akeredolu bluntly refused to shake the hands of his Deputy, Agboola Ajayi.

Just a few days to the election and their was mild drama again during the signing of a peace accord to ensure a violence-free election.

The three major contestants, Rotimi Akeredolu of APC, Eyitayo Jegede of PDP, and Agboola Ajayi of ZLP promised to abide by the terms of the accord.

They vow to eschew utterances and conducts that would encourage violence before, during, and after the elections.

At the end of the event, Akeredolu declined a request by the Master of Ceremonies for him to either shake hands, touch elbows, or embrace his ZLP opponent; the state deputy governor, Agboola Ajayi.

He would simply wave at his Deputy, but later go on to exchange pleasantries with PDP candidate, Eyitayo Jegede.

The Chairman, NPC, and former Head of State, Gen. Abdulsalami Abubakar, who spoke via zoom, urged all stakeholders to commit to the spirit of the accord.

“The governorship election in Ondo State is only a few days away and we want peace during and after the election. We want to see Nigeria as a place, where people come out peacefully and vote during the election without deprivation, and Ondo State deserves this.”

Other members of the peace committee include Bishop Mathew Kukah and the Sultan of Sokoto, Alhaji Sa’ad Abubakar.