Concerned locals called the police when the python was seen in The Lanes shopping district in Brighton, East Sussex. 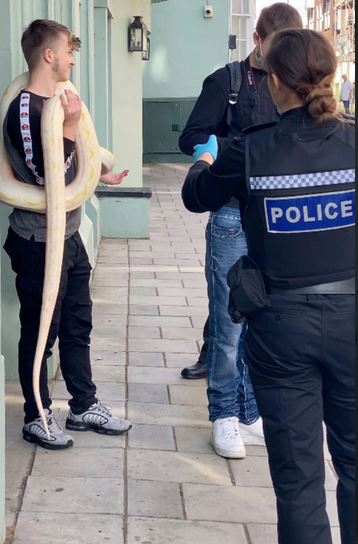 The snake handler was quizzed by cops after taking his reptile for a walk. Credit: Mercury Press

A snake handler was stopped and quizzed by police officers while taking his 12-foot python for a walk.

The smiling reptile owner was spotted with the huge pet snake by terrified shoppers.

Concerned locals called the police when the python was seen in The Lanes shopping district in Brighton, East Sussex.

Two policewomen then confronted the man and persuaded him to take the reticulated python home on Tuesday afternoon.

Erik Selby, 30, caught the bizarre incident on camera after hearing the disturbance from his office.

In the video, the snake can be seen sprawled across the pavement with its head leaning against a window next to its owner.

The two police officers encourage the man to remove the creature from the street, with the man arguing back that his pet is “content” where it is.

Eventually, he is persuaded to take the python away by the officers and he walks away from the camera with the huge animal wrapped around his neck.

The man and his friend are thought to have been intending to film the snake for their YouTube channel where they post videos of reptiles in unusual places. 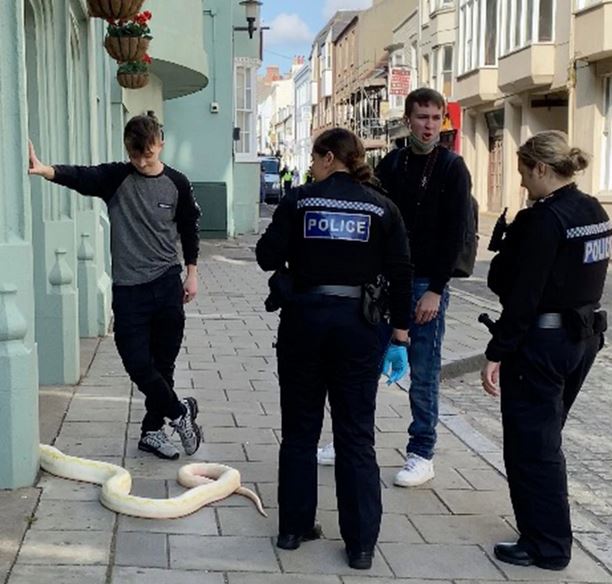 Businessman Erik said: “It was really surprising to see.

“There was a lot of commotion and somebody said something about a snake, but I thought they meant a tiny snake.

“I had seen a big yellow thing on the floor, but it didn’t even cross my mind that it was a snake at first.

“I went as close as I could, and I was suddenly like that’s the snake.”

One person said on Facebook: “If you see this idiot in Brighton, make sure you tell him what he’s doing to that snake is cruel.

“Reptiles require heat to digest their food correctly and if they don’t get the correct heating it can lead to serious health problems. Mug.”

But Erik, a video production company owner, added: “The man was arguing ‘how is this different to walking a dog?’

“The officers didn’t answer back to that. They kept encouraging him to take the snake home.

“They were as baffled as anyone else.

“They were saying how it was an interesting end to a shift.”

A Sussex Police spokesman said: “Police were called to Ship Street in Brighton at 2.35pm on Tuesday (September 29), following concern for the welfare of a large snake that was being carried in the street.

“It was reported that the snake had been dropped to the ground and being used for filming with people being invited to hold it.

“The young man with the snake agreed to return it to his car and was escorted back to his vehicle.”

This man took his 12-foot python for a walk in Brighton city centre pic.twitter.com/Hg8tf3J6Gq