#EndSARS: Nigerian Youths Kneel Down To Protest At The Lagos State House Of Assembly


Protesters at the venue took a knee and raised their fists in the air as they sang the National Anthem while seeking address. 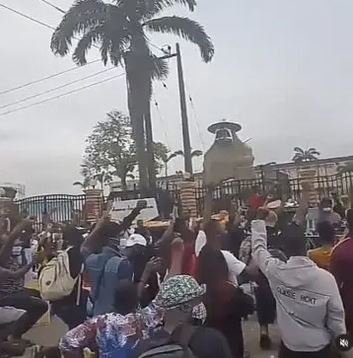 Following the ongoing protest in the country about SARS brutality, some youths were seen gathered outside the Lagos State House of Assembly today, October 9, to protest

The protesters, called for the end of Special Anti-Robbery Squad  by the government.

This comes after protesters camped out last night, October 8, at the Lagos House of Assembly for the End Sars campaign.

Protesters at the venue this morning took a knee and raised their fists in the air as they sang the National Anthem while seeking address.

The Special Anti-Robbery Squad (SARS), a department of the Nigerian police force are popularly known for harassing and extorting money from citizens especially youths, while accusing them of fraud.

Youth across the country have been protesting SARS brutality and extortion since the beginning of this week, as #EndSars trends on  social media.

Watch videos of youths protesting tat the Lagos State House of Assembly below;

Lagos Nigeria. We are live in front of the Lagos State National Assembly #EndSARS pic.twitter.com/nTxF1y0HZX