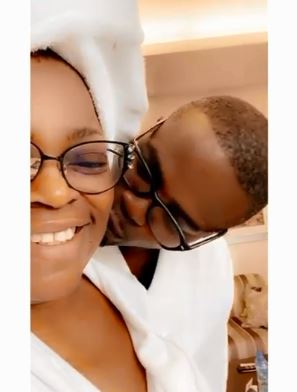 Funke Akindele and husband, JJC Skillz
A Nollywood actress, Funke Akindele aka Jenifa, alongside her husband Abdulrasheed Bello, aka JJC Skillz dragged to a court for violating coronavirus order after holding a crowded house birthday party have been pardoned.
They were pardoned by Governor Babajide Sanwo-Olu of Lagos state.
The duo had held a party in April in breach of government’s COVID-19 prevention protocols. They were later convicted and sentenced to community service.
A statement on Friday said Sanwo-Olu granted state pardon to the couple on the advice of the state’s Advisory Council on Prerogative of Mercy.
The statement, by the Director of Public Affairs, Lagos State Ministry of Justice, Kayode Oyekanmi, quoted the state Attorney General and Commissioner for Justice, Mr Moyosore Onigbanjo (SAN), as stating that the governor acted pursuant to Section 212 (1) & (2) of the 1999 Constitution.
It revealed that the governor also, on the same advice, granted amnesty to 56 inmates from various correctional centres in the state and ordered their release.
The statement, titled, ‘Sanwo-Olu releases 56 inmates, pardons Funke Akindele, husband,’ read partly, “The 56 released inmates were recommended by the Advisory Council after due examination of their case files and consideration of the length of time served, the gravity of offence, old age and ill-health, among other parameters.
“The attorney general has also enjoined the beneficiaries to be good citizens and stay away from crime.
“The eight-member Advisory Council on Prerogative of Mercy, headed by Dr Abayomi Finnih, was inaugurated by Governor Sanwo-Olu in December 2019,” the statement partly read.
Human rights lawyer, Mr Ebun-Olu Adegboruwa (SAN), had in April urged the governor to grant state pardon to the actress and her husband.
But another Lagos-based lawyer, Mr Olukoya Ogungbeje, had headed to court to challenge the state law on which the couple and other violators were convicted and sentenced by magistrates in the state.
Top Stories