Oh No! Truck Crushes Newly Married Woman, Three Others To Death In Kaduna


The victims including a newly married woman were killed when a truck loaded with sand ran into a motorcycle and tricycle. 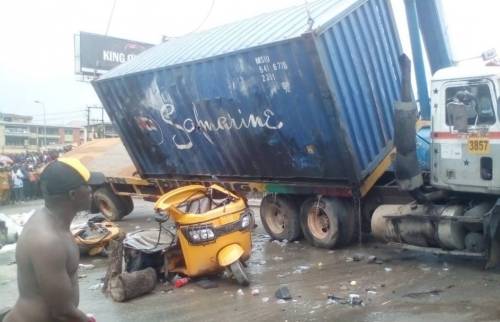 No less than four persons have been tragically killed in a horrific accident in Kaduna state.

The victims including a newly married woman were killed when a truck loaded with sand ran into a motorcycle and tricycle waiting for traffic light at Kaduna Refinery Junction along Kachia Road under Chikun Local Government Area of Kaduna State.

Though the cause of the accident is yet to be ascertained, eyewitness accounts, however, linked the incident to Kaduna State Traffic and Environmental Law Enforcement Agency staff.

The incident drew the ire of youths in the area, who trooped out in large numbers to barricade the road, resulting in long traffic.

It took the intervention of security personnel to disperse the angry youth.

Another source, however, blamed the driver for speeding while all attempts by KASTELEA officials to stop him fell on deaf ears.