The protesters had earlier requested to see the Inspector-General of Police, Mohammed Adamu. 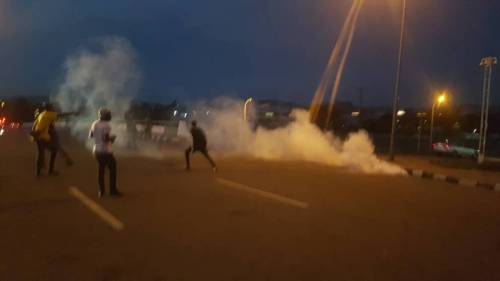 It has been reported that some police officers have fired teargas canisters to disperse #EndSARS protesters.

The police fired the teargas to chase away hundreds of Nigerians calling for an end to the Special Anti-Robbery Squad in the country.

SARS is notorious for brutality, extortion, harassment and extrajudicial killing of innocent citizens.

The protesters had earlier requested to see the Inspector-General of Police, Mohammed Adamu.

They vowed not leave the premises of building until the IGP addressed them.

But armed policemen stationed within the building fired teargas at them around 6:20pm and violently disrupted the peaceful protest.