A police officer dismissed for allegedly stealing a phone belonging to an applicant has been dragged to court. 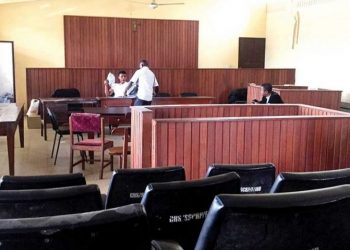 The former police officer has been charged to court
A police officer has been dismissed for stealing a phone belonging to a job applicant.
It was gathered that the 24-year-old ex-police officer, Felix Olayiwola after being dismissed, was charged to court on Monday before an Osun State Magistrates Court sitting in Osogbo.
He was alleged to have stolen the mobile phone and cash belonging to an applicant for police job.
Appearing before Magistrate Modupe Awodele, the police prosecutor, John Idoko, said the defendant committed the offence on August 24, 2020 at about 8:30pm at Osun State Command headquarters of Nigeria Police Force in Osogbo.
Idoko alleged that the defendant stole a bag belonging to Bolaji Ajiboye where he kept a Techno Camon 12 mobile phone valued N58,000.
Also, in the bag stolen by the defendant was the sum of N25,000 belonging to Bolaji, said to be an applicant for police recruitment.
The offences were contrary to Section 383 and punishable under Section 390(9) of the Criminal Code, Cap 34 Vol. II Law of Osun State, 2002.
The defendant, however, pleaded not guilty to the one count pressed against him.
His counsel, O. O. Oladele, moved for his bail, saying Olayiwola had been dismissed from the police over the offence.
But Idoko opposed the bail application, saying the defendant would jump bail.
The prosecutor also told the court that the phone got lost during the last police recruitment.
In her ruling, Magistrate Awodele, committed the defendant to bail in the sum N100,000 with one surety in like sum and adjourned the matter till November 9 for hearing.
Top Stories