#EndSARS protesters have mourned some innocent Nigerians who met their deaths in the hands of security operatives. 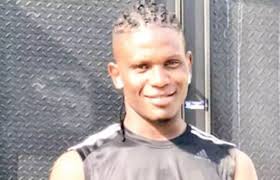 Tiamiyu Kazeem
Nigerians protesting against police brutality have remembered some Nigerian footballers who met their deaths in the hands of law enforcement agents.
They recalled how Tiamiyu Kazeem, an assistant captain of Nigeria National League side, Remo Stars, was killed by a hit-and-run vehicle after operatives of SARS allegedly pushed him out from a moving vehicle in Sagamu, Ogun State in February.
Joseph Izu, the late Shooting Stars player, was also reportedly murdered in cold blood by soldiers from the Joint Military Task Force in Okaki, Ahoada, Rivers State October 2016.
Those who commented on social media noted that the late footballers and many other Nigerians would have been alive to live their dreams, but for the security agents, and called for an end to police brutality.
“Not forgotten: SARS killed Remo Stars Asst. Captain Tiamiyu Kazeem, JTF killed Shooting Stars player Joseph Izu, SANs,  justice. Both covered with official lies but…we won’t forget,” sports journalist Fred Edoreh wrote on Twitter.
Akintola Akinfenwa added, “It could be you… Tiamiyu Kazeem could have been another Kanu Nkwankwo but SARS killed him.”
“Tiamiyu Kazeem, 21 years old, played football for Remo stars. He had just gotten invited to play football in Sweden. SARS picked him despite showing his club ID. When he asked where they were headed, a SAR operative pushed him out of the bus. An oncoming car crushed him #EndSARS,” @AfricStoryTell also tweeted.
“Our footballers are not left out, former 3SC player Tony Edjomarigwe shared his experience!! Till today the police that shot Finidi George’s brother in 1995 in Ibadan is unknown yet Izu Joseph and Tiamiyu Kazeem went down by SARS bullet #SarsMustGoNow #EndSARS  #ReformNigeriaPolice,” Ogunmiloro Kenny tweeted.
“Today I remember Izu Joseph, a player of my darling 3SC FC Ibadan. He went to his hometown to see his family and was gunned down by the members of the @PoliceNG. Nobody was prosecuted. This is why we want #EndSARS #EndPoliceBrutalityinNigeria,” @_UncleAbbey_ also wrote on Twitter.
Many Nigerian sportsmen have been victims of police brutality, with one of the most celebrated earliest cases being that of US-based quarter-miler Dele Udo, who was killed by a cop at Ojuelegba, Lagos in June 1981, while in camp for that year’s IAAF World Cup in Rome.
On October 26, 2015, a cop, Corporal Joseph Aminu, shot and killed Beauty, mother of rising tennis sensation Angel McLeod in Lagos.
Based in the United Arab Emirates, Beauty and Angel were in Nigeria after attending a tennis event in Ghana, when she was killed by Aminu at the Emperor Guest Inn, a hotel on Balarabe Musa Crescent, Victoria Island, after an argument.
In August 2019, a video of Enyimba forward Stephen Chukwude being harassed by a policeman in Enugu because he drove a Mercedes Benz went viral.
The 24-year-old was heard asking the police officer what else he wanted after identifying himself as a footballer.
But the policeman insisted that any youth who owned a Mercedes Benz was a ‘yahoo boy’ (fraudster).
This happened before the police officer grabbed the footballer’s phone after he noticed he was being filmed.
The awful incident drew condemnation from the public, who called for the policeman to be punished.
Top Stories