Nigerians in Egypt protesting joining others across the world to protest against police brutality have been arrested. 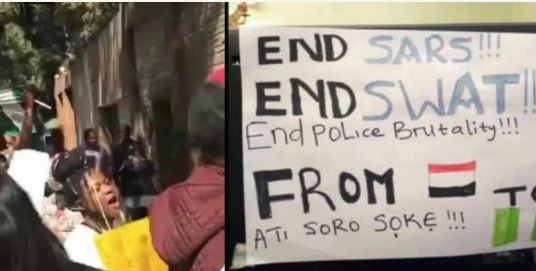 Nigerians arrested in Egypt for protesting against police brutality
The federal government has reacted after Nigerians protesting against police brutality were arrested in Cairo, Egypt.
Recall that thousands of Nigerians have been protesting in their home country over the brutality of the police.
Reacting on behalf of the federal government, the Chairman, Nigerians in Diaspora Commission, Abike Dabiri, denied the Nigerian government involvement in the Nigerians’ arrest.
She also explained that the Nigerians were not arrested at the Nigerian Embassy but at another location.
In a video that surfaced online, the Nigerians were arrested by police in the state while they were chanting solidarity songs.
While the policemen attempted to arrest them, the protesters continuously chanted #EndSARS.
One of the protesters in the video explained to the policemen that the protest was not against police in Egpyt.
Another was heard clarifying that by protesting at the Nigerian Embassy, they are believed to be in their country – Nigeria.
A Twitter user, @DrOlufunmilayo, alleged that “Nigerians were having a peaceful protest in Cairo Egypt today (Sunday) and the Nigerian Embassy called Egyptian police to arrest them. 20 people now arrested. How can Nigerians be arrested for peaceful gathering in a Nigerian embassy?”
“Consular to Nigeria Embassy in Cairo, Egypt refused to interact with peaceful protesters. They were all arrested shortly after their demands to speak with the consular,” another tweep, @AdebayoApanpa, added.
When challenged over the arrest, Dabiri, explained that Egypt had its own rules that guide public gathering.
Dabiri said this while reacting to a tweet by popular actress, Toyin Abraham, whom had said, “Aunty Abike @abikedabiri, please we are waiting to hear from you ma. The peaceful protesters that were arrested in Cairo should be released.”
Replying to the tweet, the NIDCOM boss said, “The Egyptian police dispersed them, then traced them to a very far place. They didn’t arrest them at the mission. They came in a bus driven by an Egyptian. The driver has also been arrested. The mission will do all they can. Egypt is very very strict with its laws.
“Nigerian mission did not call Police. In Cairo, gatherings without permits are banned. In Egypt, you can’t even travel from one part of the country without a permit to travel from the state you live in. They have their own rules which they strictly enforce.
“However, the mission will be engaging with the Authorities to see what can be done.” 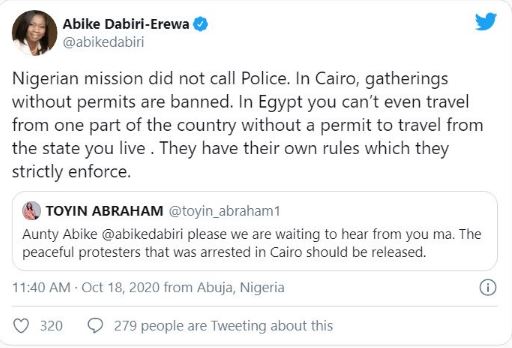