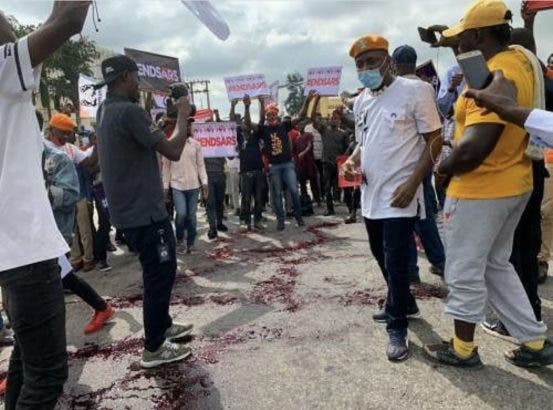 File photo
Five #EndSARS protesters have been reportedly shot dead by the police in Abuja.
According to DailyTrust, the sad incident happened at Dutse Alhaji area of Bwari Area Council, FCT on Tuesday.
Consequently, the Police Post at Dutse Alhaji was set ablaze while several vehicles were also burnt.
An eye witness told Daily Trust that the protest, which started at about 8am, was initially peaceful until the arrival of a team of Police personnel in four trucks.
“Immediately the Police arrived they started shooting at the protesters, leading to the killing of the five victims.
“This development sparked outrage by the other protesting youths who went and set the Dutse Alhaji Police Post on fire even as several commuting vehicles were also burnt,” the witness said.
He said after shooting, the Police immediately left the scene while corpses of the victims were evacuated to the Bwari General Hospital.
#EndSARS protesters have shut down the main road linking Kuje Town to Umaru Musa Yar’Adua Expressway in the Federal Capital Territory (FCT), Abuja.
The development has forced commercial and private vehicles as well as government workers to turn back from the bridge at Omega Church where the #EndSARS protesters had gathered.
Despite the movement of police and military vehicles patrolling the area, the gridlock is yet to disappear.
Daily Trust learnt that the protesters had also blocked Gosa Airport road.
Top Stories