The armed thugs conveyed in what appeared to be black government Sports Utility Vehicles with concealed number plates were seen attacking #EndSARS protesters in the Wuse 2 area of Abuja on Tuesday. 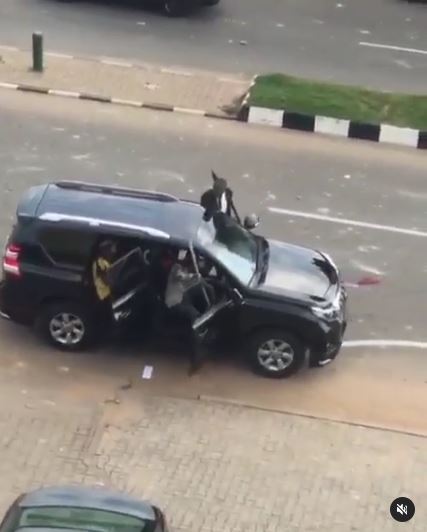 The thugs were conveyed in this car

A video has emerged showing how armed thugs were conveyed in an expensive car to the #EndSARS protest in Abuja.

The armed thugs conveyed in what appeared to be black government Sports Utility Vehicles with concealed number plates were seen attacking #EndSARS protesters in the Wuse 2 area of Abuja on Tuesday.

In a video that has gone viral on social media, some of the thugs are seen jumping into a black Prado driven by a man in suit on Adetokunbo Ademola Crescent Wuse 2.

The vehicle is seen reversing unto Hospital Avenue and then the doors are flung open while thugs wielding stones and sticks run riot.

Can this be explained? #endpolicebrutalityinnigeria

Another vehicle, which is a black Range Rover, soon joins the thugs while four buses filled with thugs park on the roadside as more thugs alight from the buses.

There were unconfirmed reports that the thugs were coordinated by an official of the Department of State Services attached to a top government official.

However, the DSS in a statement by its Spokesman, Peter Afunaya, denied the allegation,  adding that the agency could not identify any of the persons in the videos.

Afunaya asked members of the public to ignore such rumours as the agency could not engage in such a dishonourable act.

The statement titled, ‘DSS Not Aiding Attacks on #EndSARS Protesters’ read in part, “ Part of the untruth being spewed to the public is that some of its officials attached to certain VIPs aided thugs in this regard.

“In view of the false accusations, no DSS personnel has, so far, been identified to be involved in the alleged acts. It begs the question to conclude that SUVs and persons dressed in suits and sighted in conflict environments are of the DSS.”

The #EndSARs protesters had accused the government of sponsoring thugs to compromise the demonstrations.