The identity of the commanding army officer who allegedly ordered the shooting of #EndSARS protesters has been made public. 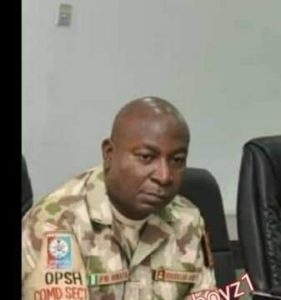 Ifo Omata
Photo of one General Ifo Omata accused of being the commanding officer who ordered the shooting of peaceful protesters at the Lekki-VI toll gate has circulated on social media.
His name was made public by DJ Switch who livestreamed the deadly shooting.
Recall that on Tuesday, October 20, many Nigerians were confirmed injured after soldiers opened fire at protesters.
It was gathered that the #LekkiMassacre started at about 6:45pm, when three unidentified men arrived the Lekki-VI toll gate and removed all the CCTV camera’s mounted there.
Minutes later, the lighting at the Lekki toll gate was switched and shortly Nigerian soldiers stormed the toll gate and opened fire on peaceful protesters.
It was reported that the soldiers were allegedly led by Brigadier General Omata on a dead or Alive mission at the Lekki-VI Tollgate.

"@Just9iceman: Ladies and Gentlemen, behold FO OMATA not IFO OMATA as reported by DJ Switch, the bastard, who's responsible for tonight's massacre at the #LekkiTollgate!

IFO OMATA is the head of the genocidal army that killed innocent protesters in Lekki.