According to the monarch, the damages incurred during the unfortunate incident would be taken care of by a coordinated community effort of Ogbomoso sons and daughters hence no need for the money. 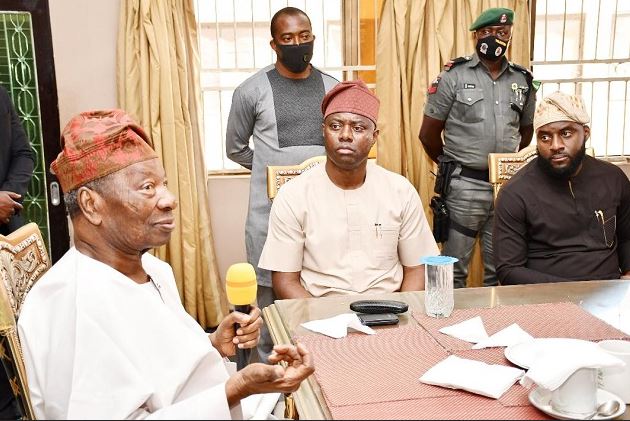 The Soun of Ogbomosho, Oba Oladunni Oyewumi Ajagungbade III who was offered the sum of N100M by the Oyo state Governor, Seyi Makinde after his palace was vandalised has turned down N90M.

The monarch’s palace was raided by hoodlums after police shot dead one during #EndSARS protest in the town.

In a letter dated October 19, 2020 addressed to Governor Makinde, the monarch politely turned down the gift.

Makinde had pledged a donation of N100m for the repairs of the vandalized palace.

According to the monarch, the damages incurred during the unfortunate incident would be taken care of by a coordinated community effort of Ogbomoso sons and daughters.

Oba Oyewumi further stated that a N10m released by the Governor would be added to the contributions of his subjects.

Part of the letter read, “allow me to use this medium to express the appreciation of my people and myself for the kind gesture by Your Excellency in pledging the sum of N100m for the cost of the repairs and renovation of the Palace from the damages of the attack and an immediate disbursement of the sum of N10m”.

“However, subsequent to your visit, and in a gesture truly representative of the good and peace-loving people of Ogbomoso, a coordinated community of Ogbomoso sons and daughters have also taken up the responsibility for the repairs and renovation of their Palace and the repair and renovation work has commenced.”

“In consequence of this development, and the assessment done, there is no need to disburse the balance of the sum of N90m.

“May I reiterate my advice during your visit that avenues and opportunities to engage our teeming youth who are largely unemployed or underemployed be assiduously explored to keep them meaningfully engaged and not idle. I have no doubt in my mind that under your able leadership this will be done.

“With respect to the misguided ones who violated the sacred sanctity of Aafin Ogbomoso, as the father of all, they are forgiven for their mistake and misdeed in the knowledge that they have retraced their steps and mended their ways for the future and will no longer allow themselves to be misguided”.

“Once again, my sincere thanks to you for your support and interest in upholding the traditional institution of Oyo State and by extension Yorubaland.

“May God grant you wisdom and success as you steer the affairs of Oyo State”.