Officers at a correctional facility in Ondo state have been chased away by hoodlums who set inmates free. 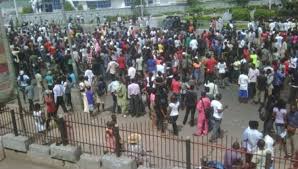 File photo
Inmates at the National Correctional Service Centre in Okitipupa, Ondo state have been released by hoodlums who stormed the area on Thursday.
It was gathered that no fewer than 58 inmates were released during the attack while a vehicle was burnt.
It was also learnt that several items were destroyed on the premises of the prison.
The Public Relations Officer of the Ondo State Command of NCS, Ogundare Babatunde, confirmed the incident to The PUNCH on the telephone.
Details later...
Top Stories