One man said that the hoodlums attacked them with weapons shortly after they disembarked from the police vehicles. 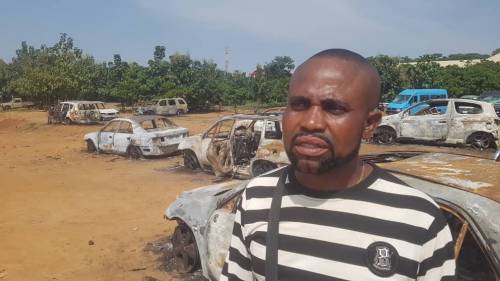 Some persons who suffered terribly at the hands of hoodlums during the #EndSARS protests have recounted their sad ordeal.

Some of the victims of recent attacks by hoodlums in Apo mechanic village in Abuja told their stories after they escaped death by a whisker, according to SaharaReporters.

Reports estimated that over N200 million worth of vehicles and properties were burnt beyond recognition during the attacks.

Some of the traumatized victims described the attack as a deliberate attempt to keep them out of business.

A victim, who craved anonymity while speaking to SaharaReporters in Abuja on Friday, alleged that the thugs were conveyed in police trucks to the area to launch the attack.

He added that the hoodlums attacked them with weapons shortly after they disembarked from the police vehicles.

He revealed that one of his apprentices managed to drive away a Toyota Sienna from the scene of the attack.

A car dealer, who was also a victim, Chukwujekwu Irechwukwu, put the cost of the vehicles that were vandalised in his stand at N78 Million.

He said, "On Monday, we saw a group of people with weapons. They started breaking the glass of our vehicles, setting them on fire.

"We could not withstand them. They were ready to kill, and there were many of them. So, we had to run for our lives. They killed many people, while others sustained injuries.

"The burnt cars do not belong to the protesters. We are not even part of the protest. We are just here doing our business."

He appealed to the government to come to their aid to enable them to pay off the owners of the cars who delivered the vehicles to them for sale.

The Chairman, Apo Traders Association, Mr John Chimeze Ife, claimed that over N200 million worth of vehicles and properties were lost to the hoodlums.

He said, "I must painfully say that we have lost not less than N200 million worth of cars and properties to the hoodlums who came from nowhere to attack us. We never belong to the EndSARS protesters. We have been here for a very long time, we are peaceful people, and we will remain so.

"We are using this opportunity to plead with the FCT administration to give us a better place to build our mechanic village so that we can also fence it appropriately to avoid disasters like this."