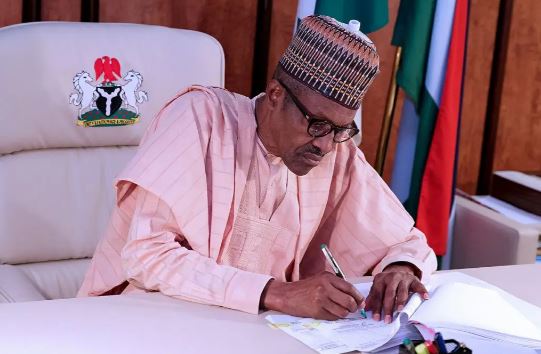 President Muhammadu Buhari
Reports of Judicial Commission of Inquiry probing Ibrahim Magu has been presented to Nigeria's President Muhammadu Buhari.
Recall that Magu was suspended as Chairman of the Economic and Financial Crimes Commission, EFCC as investigation into his activities commenced.
The investigation was led by retired Justice Ayo Salami.
Magu was accused of engaging in corruption and misconduct among others.
The allegations were raised by the Attorney General of the Federation, Abubakar Malami.
However, the panel after concluding its findings submitted the outcome to Buhari.
This was disclosed in a tweet by the Presidency.
The tweet reads: “NOW: President @MBuhari receiving the report of the Judicial Commission of Inquiry on the Investigation of Mr. Ibrahim Magu, the Acting Chairman, @officialEFCC. Justice Ayo Salami, Chair of the Judicial Commission, presenting the Report. #AsoVillaToday.”
Top Stories